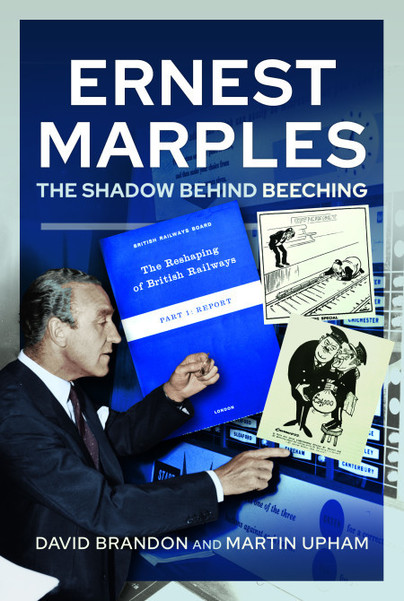 Click here for help on how to download our eBooks
Add to Basket
Add to Wishlist
You'll be £9.98 closer to your next £10.00 credit when you purchase Ernest Marples. What's this?
Need a currency converter? Check XE.com for live rates

Part political biography, part railway history this is the first book to examine the life of the man who appointed Doctor Richard Beeching to make recommendations on the future of British Railways. As such it is a valuable work and surprising that no-one has attempted a biography of this controversial politician before.

A book for those interested in the politics behind railways this forms a balanced and well researched life of a man whose promise was never quite fulfilled.

Friends of the NRM

Was REVIEW OF THE MONTH

Book Competition as featured in:

Brandon and Upham’s fresh review shows all sides of a complex man who might well have been a politician before his time. They give the pros, the cons and enough evidence for readers to make up their own minds. Their fine work redresses the imbalance in our history that has focused on Beeching alone for too long.

The importance of being Ernest? Well over forty years after his death in 1978, post-war Tory Transport minister, Ernest Marples remains a deeply controversial figure.. Emerging initially as a relatively dynamic, young thrusting politician in the comparatively placid world of 1950s Conservative politics, today there are more than a few clouds over his character namely the apparent conflict of interest between his pro-car transport reforms and personal business interests, his tax exile and his penchant for being whipped while wearing women's clothes.
But these aren't even the most controversial things about him as he is strongly associated with Lord Beeching whose 'reforms' devastated the British railway industry. in the 1960s. David Brandon and Martin Upham's extremely thorough biography covers both the details of Marples' own life while also thoroughly exploring the history of the transport network and providing a context for Marple's controversial decisions.

Everyone interested in railways has heard of Dr Richard Beeching, whose 1963 report, ‘The Reshaping of British Railways’, recommended the closure of a significant proportion of the UK’s rail network. Any discussion of the report can arouse strong emotions: was Beeching a villain who took away the train-set (that nobody used) or a hero who forced British Rail to think about profitability?

The Transport Minister who employed Beeching and set his remit was Ernest Marples. It’s worth emphasising that Beeching did not close any lines or any stations. As he was asked to do, he Identified which railway activities were profitable; which were unprofitable; and what actions would stem BR’s losses. It was the minister who made the decisions: initially Marples and then, after the Labour party won the 1964 general election, Tom Fraser (for 14 months) and Barbara Castle. Astonishingly, there has been no biography of Ernest Marples until now, yet Marples introduced measures that still affect us today, in his role as Transport Minister and his earlier positions as Postmaster General and junior Housing Minister under Harold McMillan:
- The reduction of Britain’s railway network
- Traffic wardens
- The breathalyser
- 70mph speed limit
- Premium Bonds
- Post Office savings accounts
- STD (Subscriber Trunk Dialling) phone calls
- postcodes


Although this portion of this book by Martin Upham and David Brandon draws heavily (and unsurprisingly) upon Terry Gourvish’s and Charles Loft’s earlier work, it has a highly readable and succinct explanation of events. It’s very much a book by two authors with different styles: the first six chapters cover Marples’ life and career prior to his promotion to Transport Minister in 1959. While the material is sound, the style is frustrating: I lost count of how many times we’re given a digressive preview of the future, e.g. early in a discussion of housing 1951-1954, we’re told about Marples’ successor in 1959 and a triumvirate in power during the 1960s before reverting to events of 1951; and in 1958, “While the longed-for Post Office Tower would not be built on his watch, […]”

The next block of ten chapters explains why road and rail transport both required change by the late 1950s; how Beeching addressed these issues; and the consequential impact upon Britain’s transport system. This section is excellent and far from dry. It quotes an MP, “[…] use Dr Beeching’s face cream because it removes lines.” It shows that Beeching’s recommendations were a logical response to the financial situation and based upon evidence, although the methodology for gathering that evidence may have been questionable. As the authors state, Beeching’s proposals continued a series of closures that started many years before his appointment: between 1950 and 1962, over 300 branch lines had already closed and 174,000 railway jobs had gone. “While large numbers of people had a sentimental attachment to the railways, this did not necessarily extend to using them.”

A final chapter covers Marples’ life from his poor relationship with McMillan’s successor, Ted Heath, until his death in 1978.

If you want to understand why our railway system was transformed in the 1960s, I cannot recommend this book highly enough.