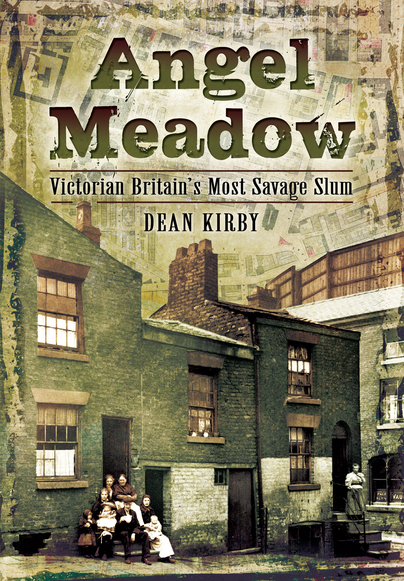 The One Show & National Press

You'll be £4.99 closer to your next £10.00 credit when you purchase Angel Meadow. What's this?
Need a currency converter? Check XE.com for live rates

'It is all free fighting here. Even some of the windows do not open, so it is useless to cry for help. Dampness and misery, violence and wrong, have left their handwriting in perfectly legible characters on the walls.' - Manchester Guardian, 1870

Step into the Victorian underworld of Angel Meadow, the vilest and most dangerous slum of the Industrial Revolution. In the shadow of the world's first cotton mill, 30,000 souls trapped by poverty are fighting for survival as the British Empire is built upon their backs. Thieves and prostitutes keep company with rats in overcrowded lodging houses and deep cellars on the banks of a black river, the Irk. Gangs of 'scuttlers' stalk the streets in pointed, brass-tipped clogs. Those who evade their clutches are hunted down by cholera, typhoid and tuberculosis. Lawless drinking dens and a cold slab in the dead house provide the only relief from a filthy and frightening world.
In this shocking book, journalist Dean Kirby takes readers on a hair-raising journey through the gin palaces, alleyways and underground vaults of this nineteenth century Manchester slum considered so diabolical it was re-christened 'hell upon earth' by Friedrich Engels.

ENTER ANGEL MEADOW IF YOU DARE...

'Dean Kirby has Angel Meadow in his blood' - Joseph O'Neill

A tribute to the people of Angel Meadow and it stands as a record of how a city of great wealth ignored the desperate poverty at its very heart. This book needs to be read and treasured. It is a lesson in the price of capitalism.

... In this book the author expertly achieves driving home the grim horror that was Angel Meadow. These were conditions at the bottom of human endurance and conditions that go beyond imaginations of modern-day citizens.

Dean Kirby manages to provide visual imagery that is vivid and it is chilling. The sense of sadness which waves through you as you read this book knowing that this is not fiction is heavily felt. As is sympathy for the Victorian people, families and children who lived and died in these conditions within one of the most prosperous cities in England. If you are interested in British history, it’s criminal past and the Victorian era this will be a satisfying and educational read.

... An excellent book, not just for those interested in the history of Manchester but for the general reader with an interest in the appalling consequences for many of the rush to industrialism where enormous wealth came from the broken bodies of the many.

I'm not an avid reader but, can't put it down. It's unbelievable this is true. Never liked history before this, now love it

A fascinating insight into the everyday struggle of Manchester's poor to survive in the slums.

The ironically-named Angel Meadow was a truly vile and lawless Victorian slum in Manchester, so horrible it was dubbed ‘hell upon earth’ by Friedrich Engels. Criminals, alcoholism, and cholera were just three of perils faced by the wretched inhabitants of this terrible place.

Dean Kirby has combined the research skills of a journalist with the talent of a born storyteller to produce a book that truly would appeal to a wide audience.

There is a core of evil politicians (all conservatives) who would happily have us return to the scandal and squalor personified by this notorious slum - this is something I was never taught about in my history lessons about the Industrial Revolution.. Warts and all portrait of the actual "hell on Earth"... Shocking!

Dean Kirby's tour through the streets of alleys of this infamous slum introduces a cast of characters, and takes you into assorted pubs ad gin-palaces from which one is thankful to escape. The East End wasn't the only slum in Britain and this book does much to suggest that it wasn't the worst.

Dean Kirby goes on to tell the story of Angel Meadow through the archives and those that lived there, he does not paint a romantic picture of the place, but a very honest picture.
Dean Kirby has written and researched one of the best books on Manchester’s social history in years, what makes this so good is that it is readable, uses some excellent illustrations of the people in written form. This a book that those who want to know more about those that worked and somehow survived the Industrial Revolution in Manchester. This is not a romantic vision of history but a stark and an honest account, that sees the place for what it was, the Slum of Slums.

' Angel Meadow: Victorian Britain's Most Savage Slum is a vigorous book and is recommended to anyone with an interest in social history.'

Working class slums have long been recognised as a consequence of the Industrial Revolution but what was life really like for the men, women and children who were crammed there? Some history texts include statistics that fail to capture the reality of the squalor, disease and hunger that dogged nineteenth century workers. Other writers generalised in order to substantiate an over-arching political or economic philosophy as to why life was as it was at a particular time.

Family history is sometimes derided as the poor relation of the repertoire. Dean Kirby is one of several researchers whose interest in a specific community was piqued whilst trying to discover how an ancestor lived. With digitisation now making a dazzling array of resources available, Angel Meadow proves that, with determination and persistence, the lost sights, sounds and smells of bygone times can be re-awoken.

Angel Meadow, an area of less that one square mile in the heart of prosperous Manchester, was dubbed Victorian Britain's most savage slum. Around 30,000 souls survived in houses, cellars and lodging places. Kirby has repopulated its narrow streets and noisy drinking dens with a few of the characters and criminals who plied their trade or scraped a precarious existence beneath its smoke-filled skies, drawing on prison records, old newspapers and oral histories alongside established texts and papers written by long-ago visitors to the slum.

By focussing on real lives and experiences, Kirby provides a lively, though shocking, read. The potential flaw with this approach is that it is easier to find material that illustrates the extreme situation rather than providing a more nuanced view of the 30,000 residents, many of whom would have lived and died in anonymity. In a less overt manner, Angel Meadow provides this type of insight too, showing that the area had features in common with other working class communities, even though conditions were especially bad. Sunday gambling was a feature of more working class areas than Angel Meadow. Men everywhere thronged to the beer-houses to escape the bad condition of their home, caused by rapacious landlords rather than negligent womenfolk. Although nineteenth century working-class women were often portrayed by external observers as lacking domestic skills it is clear that the women of Angel Meadow, along with many others across the land, could be fastidious shoppers who demanded good quality food and cooked nutritious meals.

Angel Meadow is a recommended read. With an easy, engaging style, it gives the general reader a gritty introduction to Victorian working-class life in a poverty-stricken area that was plagued by crime. For the historian hoping to flesh out statistics or test theoretical approaches it offers plenty of example material to consider.

A gripping and gritty account of life in a Manchester slum, given added poignancy by the fact that the author's ancestor survived the vicissitudes of Angel Meadow. If you like your history gory, stomach churning and crammed with human interest, look no further.

BBC The One Show

'Angel Meadow is a fascinating chronicle of Manchester’s most notorious nineteenth century ghetto. Author, Dean Kirby invites us to enter Angel Meadow, a rabbit warren of tenements and cellars pulsating with violence, brutality and depravity. Here hunger, disease, fear and hopelessness were the norm in the "vilest and most dangerous slum of the Industrial Revolution".

'The narrative is taken from real events and relayed as skilfully by Kirby as if he had been there himself with a notebook and pencil – it comes as no surprise that he is a former Manchester Evening News journalist. The reason for Kirby’s emotional attachment to Angel Meadow becomes evident when it is revealed that his ancestor, William Kirby, once lived there. An archaeological dig in 2012 gave the author an opportunity to enter the cellar of the home his forefather had once occupied and the chill of this revelation sets the tone for the rest of the book.

'Angel Meadow also includes an array of illustrations, original photographs and even a map of the area, all of which enhance this most compelling and atmospheric story.'

'Dean Kirby has Angel Meadow in his blood. When his ancestor, William Kirby, fled Ireland, where the Famine was laying waste great swathes of the country, he washed up in Victorian Britain’s most brutal slum, where death and murder stalked every street.

'Angel Meadow attained international notoriety as the embodiment of everything that was dehumanising about the new industrial society that was transforming the world. What’s more this enclave of Manchester was at the centre of every social and political development, from Chartism to the American Civil War, which was to shape the modern world. All this is wonderfully brought to life in this enthralling account of the fascinating characters who peopled the mean streets. A vivid cast of saints and sinners, including the real Sherlock Holmes and the founder of revolutionary socialism, recreate this world in a page-tuner sprinkled with hundreds of individual stories.

'This is social history at its best: accessible, fascinating and informative it never loses touch with the wonders of people’s everyday struggles. This book is a joy and a pleasure, a must for anyone interested in the far from ordinary lives of our ancestors, the people who shaped Manchester, the city which made the modern world. There is clearly no better man to tell this story than Dean Kirby.'

Dean Kirby is a journalist who has been covering the news in Manchester, his home city, for nearly 20 years. His search for his ancestors led him to Victorian Manchester's Angel Meadow slum, where he made a remarkable discovery in the rubble of an archaeological dig. Angel Meadow: Victorian Britain's Most Savage Slum is his first book.