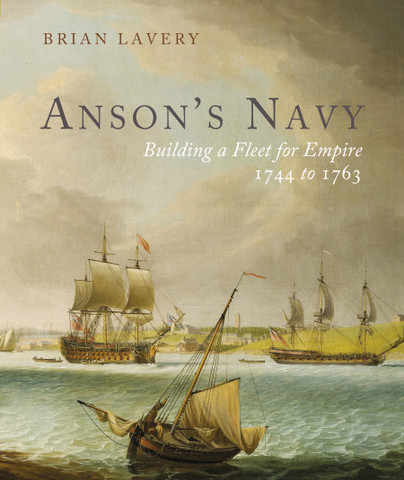 Add to Basket
Add to Wishlist
You'll be £40.00 closer to your next £10.00 credit when you purchase Anson's Navy. What's this?
+£4.50 UK Delivery or free UK delivery if order is over £40
(click here for international delivery rates)

As featured on Naval Review

"Using archival sources including personal reminiscences (one of them by the black slave Olaudah Equiano), Lavery skillfully guides the reader through his analysis of the far-reaching reforms transforming the Royal Navy into a global force which would have an effect on world history.
It is hard to imagine why it has taken so long for this book to appear, but every member of The 1805 Club will feel the need to have this volume on their bookshelf: a magnificent tour de force from a deservedly best-selling author which will appeal to the expert as much as to the enthusiast."

"It is hard to imagine why it has taken so long for this book to appear, but every member of The 1805 Club will feel the need to have this volume on their bookshelf; a magnificent tour de force from a deservedly best-selling author which will appeal to the expert as much as to the enthusiast."

"This excellent volume provides a comprehensive examination of 18th century warships and the Royal Navy."

Throughout the author has indicated end notes by numerical values which are explained at the end by a listing of the Notes involved. This together with the Bibliography and Index all combine to provide a very interesting and informative book together with the reproductions of paintings, drawings and sketches throughout.

This book presents the navy’s need for changes and the positive improvements that were made in thirteen chapters. These cover all aspects of naval service and administration. Each chapter focuses on different areas of concern, such as the ships, officers, crews, and shipboard life. Other chapters discuss the fleets, strategy and tactics, amphibious warfare and more.

This is an excellent read, focusing on the nature of the Navy that won the key victories of the Seven Years War, and all aspects of life in that Navy.