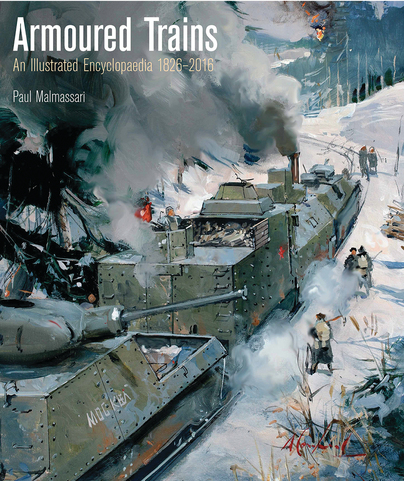 Add to Basket
Add to Wishlist
You'll be £50.00 closer to your next £10.00 credit when you purchase Armoured Trains. What's this?
+£4.50 UK Delivery or free UK delivery if order is over £35
(click here for international delivery rates)

The military was quick to see the advantages of railways in warfare, whether for the rapid deployment of men or the movement of heavy equipment like artillery. From here it was a short step to making the train a potent weapon in its own right – a mobile fort or a battleship on rails. Armed and armoured, they became the first practical self-propelled war machines, which by the time of the American Civil War were able to make a significant contribution to battlefield success.
Thereafter, almost every belligerent nation with a railway system made some use of armoured rolling stock, ranging from low-intensity colonial policing to the massive employment of armoured trains during the Russian Civil War. And although they were somewhat eclipsed as frontline weapons by the development of the tank and other AFVs, armoured trains retained a role as late as the civil wars in the former republic of Yugoslavia.
This truly encyclopaedic book covers, country by country, the huge range of fighting equipment that rode the rails over nearly two centuries. While it outlines the place of armoured trains in the evolution of warfare, it concentrates on details of their design through a vast array of photographs and the author’s meticulous drawings. Published in French in 1989, this highly regarded work has been completely revised and expanded for this English edition. It remains the last word on the subject.

This book covers, country by country, the great variety of combat teams that were used for almost two centuries. It describes the place of the armoured trains in the evolution of the war, concentrates on the details of its design through a wide range of photographs and meticulous drawings of the author. Published in French in 1989, this highly prestigious work has been completely revised and extended for this edition in English. It's still the last word on the subject.

Armored trains not on your list of interests? How about world politics or military matters? Industrial history? Period photography? If you have trouble fitting “nuclear warfare” and “armored train” into the same sentence, you’ll want to read this book.

If we were to place reference books on a scale from general to specific, this one would evidently be about as far towards the specific side as could be. While its subject is indeed highly specialised, it is covered so comprehensively that the book is unlikely to be superseded.

This book must be the definitive work currently available on this subject; the level of research is outstanding in its depth and comprehensiveness.
Rarely have I come across such a masterful tome on any subject, a true magnum opus.

If ever there were a railway equivalent of Jane's Armour and Artillery, this coffee-table tome would be it.

I remember reviewing Christian Wolmar’s excellent Engines of War and thinking that an entire encyclopaedia devoted to armoured trains would be a fine idea. Lo and behold, wish, and it will appear (at least occasionally!).

Paul Malmassari served with distinction in the French military, NATO and the UN, so he brings a wealth of real life experience to this magnum opus. He is a superb writer and researcher and is well able to impart his knowledge.

Credit must also be given to Seaforth; this is a beautifully bound, printed and illustrated book.

Anyone who buys it will get a lifetime out of it, a thing of beauty and joy forever.

A good selection of new railway books. The blockbuster is Lt Col Paul Malmassari's Armoured Trains 1825-2016.
A historian and modeler, his thorough research will fascinate those interested in railways and in military history. Armoured trains were once widespread, operating in the USA, Europe, ex colonies, Russia and even Argentina. Astonishingly they were used recently in conflicts in the former Yugoslavia and Rhodesia/Zimbabwe. Armour included sandbags, cotton bales, timber, concrete and steel plate.

Easily the best work on the subject. Formidable!

This is an altogether thorough work that is unlikely to be equalled.

If you have even a passing interest in armoured trains then this is the book for you. It is a fascinating subject and every range of fighting equipment that ran on rails over nearly two centuries is featured here. The level of detail is stunning as is the number and quality of photographs with the added bonus of some high quality drawings provided by the author to a constant scale.
Very highly recommended to military model makers, railway enthusiasts and historians of modern warfare.

This is a very authoritative book on a fascinating topic. Highly recommended.

A masterpiece. An indispensable source for the modeller of military trains and for the creators of dioramas and vignettes related to the theme.

Among the many photos are some impressive scenes, and equipment which had clearly been specially built, others made in local workshops and others just using what was available locally. One in particular grabbed my eye, as it is a simple armoured box wagon, with rifles poked through firing ports in the side. It just so reminded me of the image of Dad's Army, and their drill using ports in the sides of Cpl Jones's butchers van. The whole book is just packed with fascinating material.

When you think how long trais have been a part of our lives, this is an extraordinary book, tracing the history of how nations with something to fear from opposing nations, fortified theirs with an enormous range of firepower. A brilliant history, with amazing photographs and illustrations!

It is very evident that the author of this volume knows and loves his subject. Originally published in France in 1989, this revised and upgraded English-language version is well researched and, due to the depth of information, is likely to become the authoritative work on armoured trains.

Lieutenant-Colonel PAUL MALMASSARI served with distinction in the French army, eventually commanding a tank regiment. He has written extensively about the history of tanks and mechanised warfare, but Armoured Trains is considered his master work.