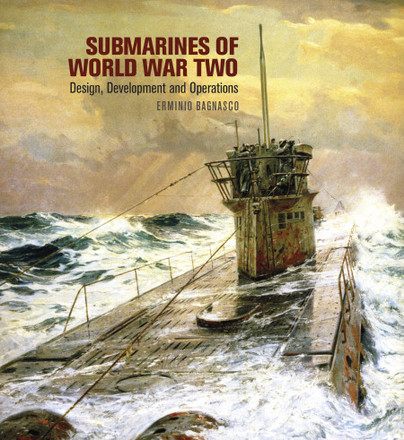 Add to Basket
Add to Wishlist
You'll be £28.00 closer to your next £10.00 credit when you purchase Submarines of World War Two. What's this?
+£4.50 UK Delivery or free UK delivery if order is over £35
(click here for international delivery rates)

For the first time in naval warfare submarines played a major role in the war at sea in the years 1939–45, and this major reference book describes all the classes of vessel that were deployed by the eighteen combatant nations during those years. They were responsible for the sinking of 33 million tons of merchant shipping with the German and US navies achieving the greatest advantage with this devastating strategic weapon.

Most of the countless books about submarines in WWII confine themselves to the boats of one particular navy or another: in this book every class of boat, from midgets to the large U-cruisers, of all the nations is covered in detail – more than 2,500 boats – and projected and experimental designs are also included. This furnishes the reader with an overall picture that allows for comparison between the technical and operational aspects of all the submarines that took part in the War. This is further helped by the inclusion of more than 400 illustrations. The author also outlines the evolution of the submarine and submarine warfare – including the interplay of wartime experience, design improvement and tactical innovation – thereby placing the subject in its true historical perspective.

This new edition of a classic work has been completely redesigned and overhauled to make the most of the author’s superb collection of photographs, and will appeal to a wide new audience for whom this important work has been unavailable for many years.

book tips by Oliver Bothmann for

The description of each class of submarine begins with a wealth of statistical data, including number of boats in the class, names, dates and locations of builds, dimensions, complement, and performance data. The design and development of each class is discussed and its significant contributions are covered. The final disposition of every boat in the class is listed, and, if lost, the means by which it was lost is given. In some cases, as for instance with Germany's Type VII boats, these lists can be very lengthy -- a grim reminder of the appalling human cost of WWII submarine warfare.

Submarines of World War Two is printed on glossy stock and profusely illustrated with line drawings (in the form of cross-sections and outboard and inboard profiles) and black-and-white photographs. It rewards the casual page-turner as well as the serious student of naval history.

This is a superbly written book and it is very entertaining to read. Undoubtedly there
will be much new information presented to the reader and the author must have spent
years researching the background of the Boats noted in this excellent tome. If the history
of World War 2 submarines is of interest, then this book is rated as a “Must buy”. It is
worth every penny paid.

A must I think for anyone with a historical interest in submarines.

Still the best single-volume coverage of the subject.

Submarines came into their own, playing a significant strategic role in the war at sea in the years 1939-45, and this major reference book describes all the classes of vessel that were deployed by the eighteen combatant nations during those years. First published in English in 1977, this classic work has been redesigned and updated to include more of the author’s superb collection of photographs. Sadly out of print for a number of years, this new edition will appeal to a wide new audience.