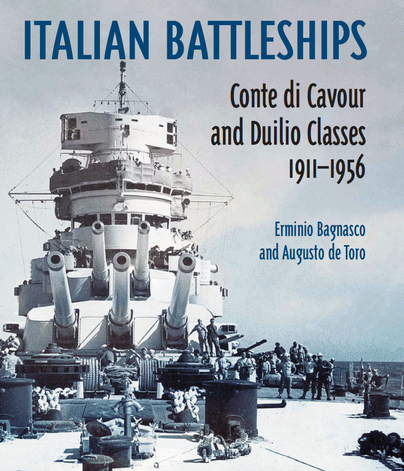 You'll be £36.00 closer to your next £10.00 credit when you purchase Italian Battleships. What's this?
+£4.50 UK Delivery or free UK delivery if order is over £35
(click here for international delivery rates)

The book is highly illustrated throughout, with hundreds of archive images from all periods of their service, along with many detailed drawings and diagrams which include the description of all the many ships spaces. Especially attractive for modellers, there is also a section of colour profiles, illustrating the varied colour schemes they carried over their service careers. Everything is provided in great detail and I can't imagine there can be anything else to add, and supported by so many excellent images. Highly recommended.

This is a beautiful book inside and out looking at Italian battleships from beginning to end featuring two classes of Italian ship, the Conte di Cavour and the Duilio. This book covers from the 1910’s to the 50’s and the book is absolutely packed with many excellent photographs, diagrams, charts and statistical information. This book is one of those books that becomes a goto resource for any information you need on the subject, the research and writing is very good and has been painstakingly done, it really is so comprehensively made. I would more than happily recommend this book to anyone with an interest in naval ships and design.

Italian battleships from my experience do not get much in the way of cover, and so this offering from Seaforth Publishing provides the reader with a good look at how vessels from the first war were brought up together to take part in the second. The combination of the written word, schematics, photographs and artists prints all in one place provides a concise look at these battleship classes.

This a further collaboration of two authors who previously crafted a similar book on the Littorio Class battleships. The vessels are covered impressively by this book, the survivors of a class designed before WWI – Very Highly Recommended

This is the story of the ships of two classes of Italian battleships, Conte di Cavour and Duilio Classes from their beginnings to their ends. The design decisions which brought them into being, the building processes, their wartime activities and the finale of the breakers yards are all here. The period covered is from 1911 to 1956. The book is packed with information which could only have been gathered and presented through painstaking research by the two authors. The text is clear and lucid and is supported by an incredible number of photographs of all aspects of the ships’ existence. Even the various camouflage designs and colours are illustrated. There cannot be much to be known about these vessels, as individual ships that is not in this book.
It is a pleasure to read and we warmly recommend it to a wide range of readers.

"This book is an absorbing read. It is a book that anybody with an interest in Italian battleships should read." 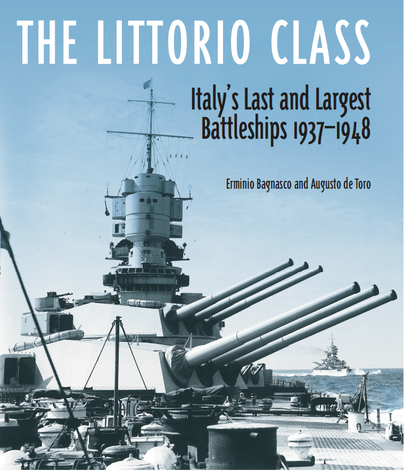 For its final battleship design Italy ignored all treaty restrictions on tonnage, and produced one of Europe's largest and most powerful capital ships, comparable with Germany's Bismarck class, similarly built in defiance of international agreements. The three ships of the Littorio class were typical of Italian design, being fast and elegant, but also boasting a revolutionary protective scheme – which was tested to the limits, as all three were to be heavily damaged in the hard-fought naval war in the Mediterranean; Roma had the unfortunate distinction of being the first capital ship sunk by…