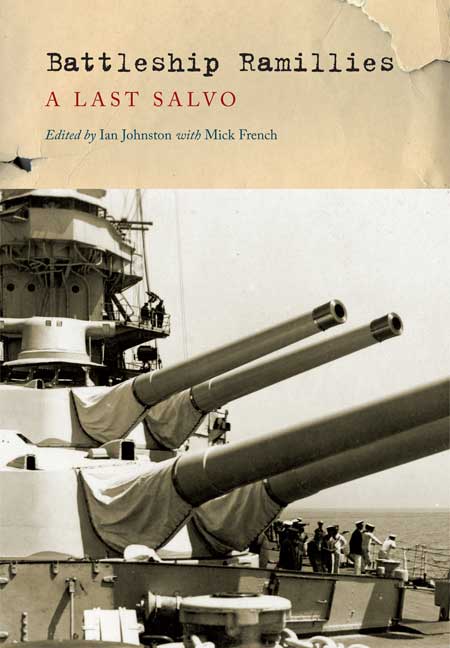 Click here for help on how to download our eBooks
Add to Basket
Add to Wishlist
You'll be £10.00 closer to your next £10.00 credit when you purchase Battleship Ramillies. What's this?
Need a currency converter? Check XE.com for live rates

HMS Ramillies was the last battleship to join the Grand Fleet in 1917 and survived to fight in the Second World War. Although the ship did not make headlines, she was actively employed from start to finish, and even survived being torpedoed by a Japanese submarine. In this respect she was typical rather than extraordinary but, like any large ship, to her crew she was unique – she was certainly the only ship in British naval history whose captain wore a grass skirt into battle (honouring a Maori belief that the ship would come to no harm while he did so; Ramillies survived the war).

This book, produced with the full cooperation of the HMS Ramillies Association, is a tribute to the ship in words and photographs, deftly assembled from a combination of interviews with surviving crew members, and carefully researched diaries and written accounts by those connected with the ship, including HRH the Duke of Edinburgh for whom Ramillies was his first ship. Many personal photo albums were unearthed to provide previously unpublished illustrations, which add a further dimension to a vivid picture of naval life in an almost-forgotten era.

A most enjoyable read which many ex RN personnel could relate to.

This book is based on a series of eyewitness accounts of life on the Ramillies, produced with the help of the HMS Ramillies Association. They all come from the lower ranks, which makes them doubly valuable, as this aspect of naval life isn't always well represented.

These stories make it clear just how varied life could be onboard a battleship. We see the life of an electrician, dealing with the wiring of what amounted to a small town. Another man served a as bricklayer, maintaining the brick lined interior of the oil fired boilers.

The book starts with one account of life on the Ramillies during the First World War. We then move on to two longer memoirs (including the electrician). This is followed by several chapters arranged by themes, with a series of shorter accounts - this includes the D-Day and Madagascar operations, the role of the Royal Marines, and the experiences of the youngest members of the crews.

There are several features that appear in most of the memoirs. These include the incredible noise of the guns - not just the main 15in guns, which were quite capable of doing significant damage to their own ship during prolonged bombardments, but also the more immediate impact of the smaller more rapid firing guns. The Maori grass skirt given to the captain during a visit to New Zealand also features heavily. It was said to protect the ship against harm if the captain wore it in battle, and it was duly donned during the D-Day landings.

For me the most interesting aspect of this book is the stories of everyday life on the Ramillies, an incredibly complex machine that required nearly 1,000 men to keep running. When she was in combat everyone was involved, but in the long gaps between major actions life revolved more around food and entertainment (and in some cases ways to make money). The Ramillies carried a tailor's shop, a duty-free shop selling cigarettes, pens, paper and other small items, a NAAFI and even a small cinema screen.

This is a wonderful account of life on a major warship at the end of the era of the battleship, a way of life and a type of warship that have both disappeared.

The comprehensive photographic coverage is excellent... An absorbing picture of a largely forgotten era, this book is to be recommended as an account of life at sea in wartime.

HMS Ramillies was scrapped in 1949 so this book could be seen as a record of a tradition of 'oral history' that has grown up around the battleship. The memories of crew members are supported by photographs from personal crew members' photo albums unearthed during Mick's quest to tell the stories. Many of these photographs have not previously been published helping the book provide a picture of naval life in an era now slowly fading from memory.

Battleship Ramillies is a unique insight into a vanished era.

A fitting tribute to ship and crew.

IAN JOHNSTON is the author of many well-regarded naval books, the most recently published being Clydebank Battlecruisers and The Battleship Builders (with Ian Buxton). For this project he worked with MICK FRENCH, a leading light in the HMS Ramillies Association, selecting and editing the material.