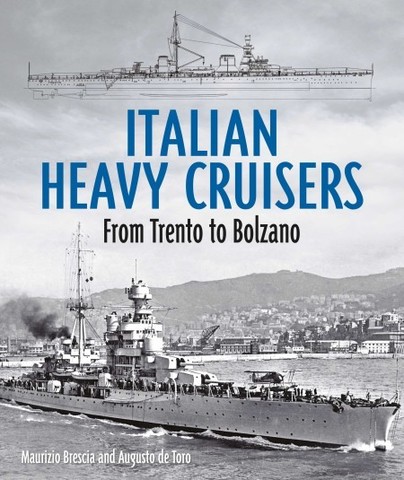 From Trento to Bolzano

Preorder
Add to Wishlist
You'll be £32.00 closer to your next £10.00 credit when you purchase Italian Heavy Cruisers. What's this?
+£4.50 UK Delivery or free UK delivery if order is over £40
(click here for international delivery rates)

When the Washington Naval Treaty of 1922 effectively banned the building of battleships, competition between the major navies concentrated on the next most powerful category, heavy cruisers limited to 10,000 tons displacement and 8-inch guns. Italy followed this trend, the first design for what became Trento and Trieste being ordered in 1924. These were the fastest of the first generation ‘Treaty’ cruisers but were very lightly armoured, and the succeeding Zara class of four ships were slower but better protected. However, before the final ship of this class (Pola) had been completed, there was a return to the earlier fast, lightly protected concept with the Bolzano, although this ship also incorporated aspects of the Zara design.

The political background, design history and technical features of these classes are covered in great depth in this volume. They were important ships, subject to incremental improvement so no two were identical, and modelmakers in particular will appreciate the space devoted to the variations in appearance, using both description and illustration.

As major units of the Italian battlefleet, they were more active than most during the war and their careers are fully detailed, including analyses of damage suffered. Tragically, they were all sunk and the full circumstances of each loss is explored.

As befits a technical history, the book is thoroughly illustrated with ship and armament plans, detail drawings and colour camouflage schemes, as well as an outstanding collection of photographs. Translated from the same series that produced the highly successful Italian Battleships, this volume is a fitting companion.

MAURIZIO BRESCIA serves on the Editorial Board of the monthly Storia Militare. He has published a number of books on Italian warships and provided illustrations for many more. For Seaforth he wrote Mussolini’s Navy published in 2012.

AUGUSTO DE TORO is an authority on the political and economic aspects of naval policy, and himself the author of many articles and monographs, including co-writing The Littorio Class and Italian Battleships.