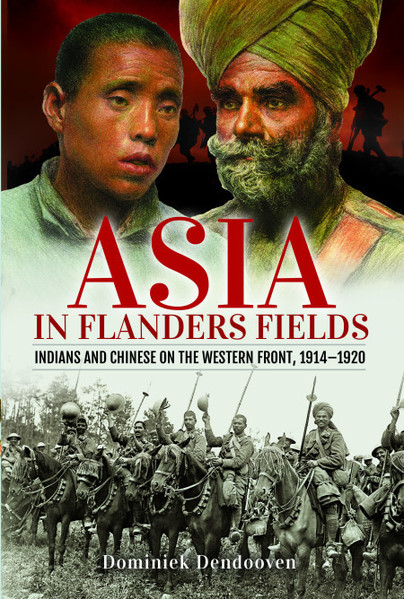 Add to Basket
Add to Wishlist
You'll be £25.00 closer to your next £10.00 credit when you purchase Asia in Flanders Fields. What's this?
+£4.50 UK Delivery or free UK delivery if order is over £40
(click here for international delivery rates)

The First World War brought peoples from five continents to support the British and French Allies on the Western Front. Many were from colonial territories in the British and French empires, and the largest contingents were Indians and Chinese - some 140,000. It is a story of the encounter with the European 'other', including the civilian European local populations, often marred by racism, discrimination and xenophobia both inside and outside the military command, but also lightened by moving and enduring 'human' social relationships. The vital contribution to the Alles and the huge sacrifices involved were scarcely recognised at the Paris Peace Conference in 1918 or the post-war victory celebrations and this led to resentment - see huge media coverage in 2021. The effect of the European 'other' experience enhanced Asian political awareness and self-confidence, and stimulated anti-imperialism and proto-nationalism. This is a vivid and original contribution to imperial decline from the First World War. and the originality of the work is enhanced by rare sources culled from original documents and 'local' European fieldwork - in French, German and Flemish.

"Whilst much has been written in the last decade about the Indian military during the First World War, covering the combatant and non-combatant experience, and combining it with the experience of the Chinese Labour Corps to provide a broader experience of Asian peoples in Europe is a novel concept and a rewarding read."

Originating with Greenhut in the 1980s, then Corrigan and Omissi in the late 1990s, and with increasing regularity since the centenary of the Great War, the Indian Army’s story has been told several times over, especially that on the Western Front. What Dominiek Dendooven does that many others do not is to consider Indian combatants and non-combatants together, providing a well-rounded picture of the Indian experience of Europe between 1914 and 1918. The author, however, does not stop with the Indian experience of European warfare, the second half of the volume assesses the experience of the Chinese Labour Corps in North-West Europe.

The introduction discusses the First World War in relation to Britain’s retreat from empire, including a few interesting historiographical notes before going on to unpack the concept of postcolonialism.

An estimated 138,000 Indians were deployed to Europe during the First World War, 90,000 combatants and just under 50,000 labourers. Dendooven breaks down his Indian section to study the Indian Corps and cavalry and follows this with the Indian Labour Corps. The experience of serving in Europe is discussed in each case and anecdotes teased out to illustrate the strangeness and fascination of Europe to these men, such as French cinema. These chapters are followed by studies of Indian exchanges with the peoples of Belgium and France, the experience of POWs, what ideas and lessons Indians took from Europe and, finally, a chapter on veterans returning to India from 1918 onwards. Dendooven ties the experience of ex-servicemen with the rise of nationalism and the failings of the British to sufficiently compensate India for its contribution to the Allied victory.

One unfortunate element of the Indian section is the use of the term ‘coloured’ when discussing racist views held by BEF commanders such as Sir Herbert Plumer, it is disappointing that this term has made it passed the editorial net. On occasion the author also overstates the novelty of the Indian section, there are clear similarities with the earlier work of Omissi in particular.
As stated previously, the second half of the book is concerned with the Chinese Labour Corps.
140,000 Chinese nationals journeyed to North-Western Europe during the Great War, 96,000
of those were part of the British raised Chinese Labour Corps. In much the same way as the section on the Indian experience, there are chapters on the Chinese Labour their experience in Europe, their interaction with the peoples of Northern Europe and the more lasting impacts of the war on the men of the Chinese Labour Corps. Again, the use of anecdotes provides illustration and highlights the personal nature of the Chinese experience on the Western Front.

Whilst much has been written in the last decade about the Indian military during the First World War, covering the combatant and non-combatant experience, and combining it with the experience of the Chinese Labour Corps to provide a broader experience of Asian peoples in Europe is a novel concept and a rewarding read.

Overall, a really enjoyable read on a subject that fully deserves greater recognition if you want to fully understand the breadth of WW1 and its cultural impacts. A deserved 4 mushroom heads.

Extract as featured in

The author has made a valuable contribution to the historiography of a topic which has been neglected for far too long. Recommended.

World War I provides the backdrop to most of the description and analysis in Dendooven’s book. He makes excellent use of mainly western primary sources, but Dendooven also makes the most of those from India and especially China, including interpreting their message laden artefacts. The picture he draws of the Indians and Chinese is probably as good as we are going to get with the sources available, but we should thank Dendooven and other like-minded historians who have picked up the cudgel for a transnational history of World War I on the Western Front.

This book has an unusual perspective regarding the Western Front, and it is derived from the author’s PhD thesis. It is appealing as it deals with the support given to the Allied war effort by Indians and Chinese. Very little is written on their activities in English, so this new volume is a welcomed edition.

Dr Dominiek Dendooven is an historian of the First World War and brings a unique European and Asian perspective to the study of the lived experiences of Indian and Chinese who served with the Allies and played vital combat and support roles in the European Great Power conflict. He is Curator and Researcher for the Flanders Fields Museum and is Associate Lecturer and Researcher at the University of Antwerp and University of Louvain. His PhD - basis of the book - is from University of Kent. He is an established author in English and French with over ten publications including works for English-speaking readers.