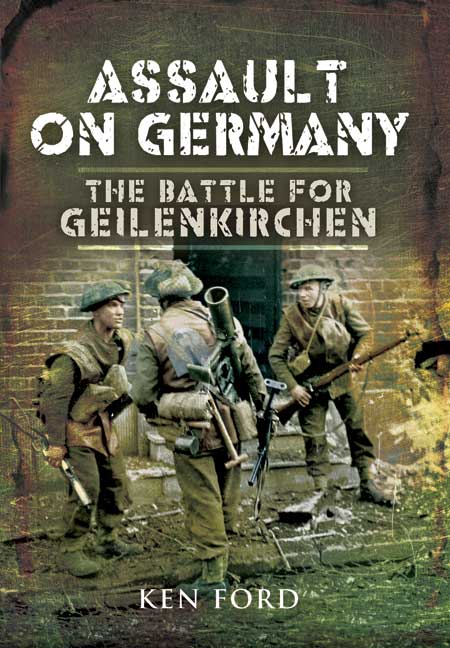 The Battle for Geilenkirchen

Click here for help on how to download our eBooks
Add to Basket
Add to Wishlist
You'll be £4.99 closer to your next £10.00 credit when you purchase Assault on Germany. What's this?
Need a currency converter? Check XE.com for live rates

The Anglo-American battle for the Geilenkirchen salient in November 1944 was infantry warfare at its worst, and it is described in vivid detail in this new edition of Ken Ford’s classic study.

The onset of winter saw the Allied advance from the Normandy beaches forced to a halt on Germany’s doorstep. The clock had been put back to the days of the Great War – the Allies had arrived at the Siegfried Line and were forced to attack the fortifications from the hell of the trenches.

Geilenkirchen was the first battle on German soil to be fought by the British since Minden in 1759. For them, it was just one more battle on the way to Berlin, but for the American 84th Division, it was a first faltering step into war and a bitter lesson in the attrition and savagery of combat.

The story is told by the men who were there – the British, the Americans, and the Germans who were fighting desperately for their homeland. Neither side was victorious - both lost more men than they could afford and paid a heavy price in young lives for a few miles of ground.

This is the best book of this battle

'Ford has provided an excellent account of infantry at this key moment in the Second World War, when the Allies were approaching the German border, and the German army had staged a near-miraculous comeback after being almost destroyed in France.'