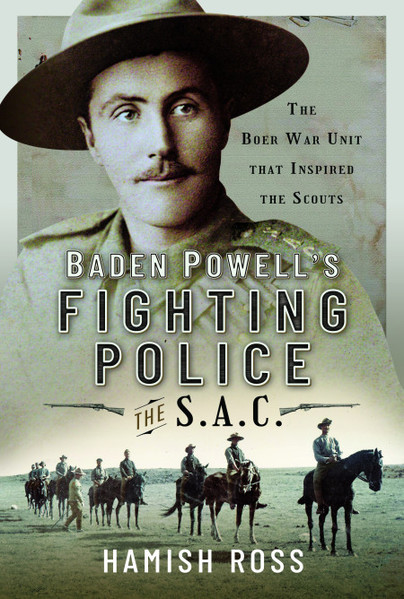 The Boer War unit that inspired the Scouts

Click here for help on how to download our eBooks
Add to Basket
Add to Wishlist
You'll be £9.98 closer to your next £10.00 credit when you purchase Baden Powell’s Fighting Police – The SAC. What's this?
Need a currency converter? Check XE.com for live rates

This work begins in August 1900 during the war in South Africa, when mounted Boer commandos ranging across the veldt superseded pitched battles of massed armies and heavy weaponry. Thanks to his flair for organisation, Baden-Powell is asked to create a mounted force with a combined military and police role, and will be answerable to the Commander-in-Chief and the civil High Commissioner.

Rejecting Army models of command, Baden-Powell creates the South African Constabulary (SAC) with a small number of officers, dividing it into Troops of 100 men, then sub-dividing again into sections and the key working unit – the squad of six men under a corporal. To get the calibre of recruit he wants, the SAC will be better paid than the Army and he expects the men to be motivated by a code of honour, to be self-reliant and ‘handy men’ able to tackle any kind of work. Most recruits come from the UK, but in Canada, however, the Governor General intervenes and botches selection.

The SAC’s effectiveness comes to light in this book – the first that deals with its creation and development; its wartime achievements and its peace-time transition into a community support helping local people returning to their homes. This work also highlights what Baden-Powell brought from the SAC and gave anew to the Scouts.

Based on research using archive material in the UK, South Africa and Canada, it also includes images that have not previously appeared before in the public domain.

I found the book enjoyable and an easy read. It stands as an adjunct to the life of one of Britain's more colourful characters and is an important part of his biography.