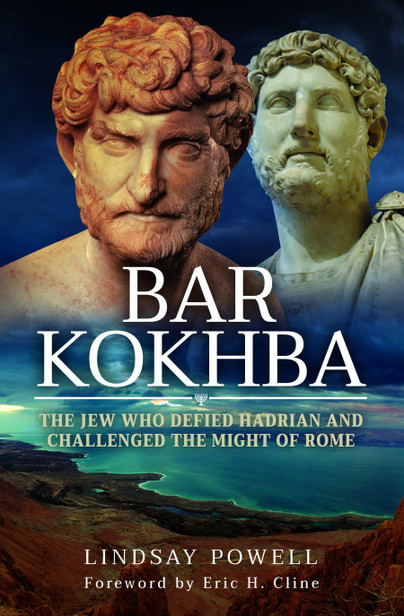 The Jew Who Defied Hadrian and Challenged the Might of Rome

An article written by the author for Aspects of History: 'Bar Kokhba: In Search of the Rebel Whose Legend Helped Found a Nation'

The outcome of a brutal war, which took place 1,885 years ago, continues to reverberate in the Near East today. It is a tale largely unknown outside Israel, and yet it helps explain why the region continues to be engulfed by strife.

“As a historian I learned about the Bar Kokhba War, but the explanations for why and how it happened seemed confused,” said historian and author Lindsay Powell. “As with King Arthur, fact and myth have become muddled. To establish the truth, I travelled across three continents. BAR KOKHBA: The Jew Who Defied Hadrian and Challenged the Might of Rome is the result.”

This amazing and consequential story involves an epic struggle between the two strong-willed leaders over who would rule a nation. One protagonist was Hadrian, the cosmopolitan ruler of the vast Roman Empire, then at its zenith, who some regarded as divine. He is best known today for the famous wall he built in northern Britain. The other was Shim’on, a Jewish military leader in a district of a minor province; some believed him to be the ‘King Messiah’ after sage Rabbi Akiba allegedly saw him fulfilling biblical prophecy and named him ‘Bar Kokhba’ (‘Son of a Star’).

It is also the tale of the clash of two ancient cultures. One was the conqueror, seeking to maintain control of its hard-won dominion they called Judaea; the other was the conquered, seeking to break free and establish a new nation. Shim’on called his new country Israel.

Several causes for the war have been suggested, such as bans on circumcision or studying Torah which Powell evaluates in his book. Most likely it was the decision by Hadrian to rebuild then ruined Jerusalem as a pagan city for retired Roman soldiers. He called it Aelia Capitolina after his own family and the triad of Roman gods whose shrine may have been erected over the remains of the Second Temple. It may or may not have been Hadrian’s intention, but the Jews took it as a direct insult.

Powell said: “Amazingly, the Jewish rebels withstood the Roman onslaught for three-and-a-half years. They established an independent nation with its own administration led by Shim’on as its president (nasi). They minted their own coins by overstriking Roman coins with Jewish iconography, cheerfully obliterating the image of the emperor and pagan gods with every strike of the hammer.”

Found in caves in the Judaean Desert in the 1950s and 1960s, letters from Shim’on to his lieutenants survive revealing how deeply involved he was in day-to-day actions, and his increasing frustration with their laziness.

For reasons Powell explains in his book, the Jews ultimately lost. In retribution, Hadrian expelled the Jews from Judea and barred them from entering Aelia Capitolina and its holy sites. He even changed the name of the Roman province to Syria Palaestina – the origin of Palestine.

“The outcome of that David and Goliath contest was of great consequence, both for the people of Judaea and for Judaism itself,” said Powell. “Centuries of bloodshed followed.”

In death, Bar Kokhba became a legend. Over the ages, this flawed rebel with a cause become a hero for the increasingly persecuted Jews in the Diaspora longing to found a new Jewish homeland. Across Europe in the early twentieth century, there were athletic teams competing in sports events under the moniker ‘Bar Kochba’ as part of a movement to create the image of the ‘Muscular Jew’. The last games were held in Berlin in 1936, just two years before Kristallnacht.

Eric H. Cline, Professor of Classical and Ancient Near Eastern Studies and Anthropology, George Washington University, writes in the foreword of the book: “There are a very limited number of people whose life, and death, still impact other centuries after they have shuffled off this mortal coil. There are fewer still who inspire entire movements, and migrations, such as the return to what is now modern Israel by the Zionists, after that same length of time.”

In the interwar years in Palestine, armed Jewish resistance groups championed Bar Kokhba as a figure of inspiration in their own struggle against the British and Palestinian Arabs to establish a new State of Israel; it finally came into being in 1948. Today modern Israelis still celebrate Bar Kokhba with bonfires and songs on the annual Lag B’Omer holiday.

In researching his book, Powell went on a journey stretching from Hollywood to London, Jerusalem to Tel Aviv and Caesarea, and Herodium to Ein Gedi. He drew upon archaeology, art, coins, inscriptions, militaria, as well as secular and religious documents, to produce a compelling and complete account of the people and events at a crucial time in world history.

Commenting on the new book, Cline said: “Let it be said that Powell’s researches have resulted in an enthralling journey through history. It is a marvelous search for the man behind the myth, which is well worth reading. I hope that you enjoy it as much as I did.”


Captivating and passionate, Bar Kokhba combines a personal journey with a scholarly investigation. Lindsay Powell tells an absorbing tale of the clash between the Jewish rebel and the Roman emperor, a story that still resonates today.

Barry Strauss, author of The War that Made the Roman Empire: Antony, Cleopatra, and Octavian at Actium.

Let it be said that Powell’s researches [into Bar Kokhba] have resulted in an enthralling journey through history. It is a marvelous search for the man behind the myth, which is well worth reading. I hope that you enjoy it as much as I did.

Eric H. Cline, Professor of Classical and Ancient Near Eastern Studies and of Anthropology; Director of the GWU Capitol Archaeological Institute, George Washington University and author of Jerusalem Besieged.

In this very engaging book, we follow Lindsay Powell’s remarkable journey through archaeological sites and museums searching for the enigmatic character of Bar Kokhba, the leader of the Jewish rebellion that overshadowed the end of Hadrian’s reign. In the light of new evidence and recent research, Powell’s insightful study sheds light on one of the most dramatic and bloodiest episodes in Jewish history.

Most people I encounter have heard of the First Jewish Revolt, the war in which the Romans famously destroyed the temple in Jerusalem and captured the fortress rock known as Masada to end hostilities in 73/74 CE. Few know, however, that some sixty years later a second war broke out between the same antagonists. This one focused on what the Jews of Palestine had lost the first time around, Jerusalem and its thousand-year-old temple. Known as the Bar Kokhba Revolt, surviving historical evidence for it is maddeningly sparse.
In this fast-paced volume, military historian Lindsay Powell stitches the together the evidence of the Bar Kokhba Revolt in a detective story cum adventure travelogue. He frames the war in terms of its two primary leaders, Hadrian the Roman emperor and Simon bar Kosiba, “prince” (Hebrew nasi) of the Jewish insurgents. After interviewing British experts on Hadrian, prodding Israeli curators of the archaeological remains, and scrambling around the key sites in Israel, Powell admixes his own expertise on Roman warfare to produce a coherent and insightful narrative. His discussion investigates all the main issues and leaves us informed but properly cautious about what really happened and why. Be advised, however: leave yourself plenty of time when you first pick up Bar Kokhba, because you will not want to put it down until you have turned the last page. I didn’t.

Lindsay Powell’s latest work of investigative history, Bar Kokhba, is an electrifying examination of the lesser-known Jewish messiah who fought a bloody war against the forces of the Roman Emperor Hadrian for control of Judaea in the second century. The Second Jewish War, which had sweeping consequences for Judaism, as well as the other embryonic messianic movement, Christianity, is cracked wide open by Powell, like a slab of perfectly chilled beer at a backyard party on a hot summer day.

Lindsay Powell, noted researcher and military analyst, has given us another fine book. This time he has turned his efforts to a prodigious research project to unlock the story of Simon Bar Kokhba, the Israelite hero of the Second Jewish Revolt against Rome, the first significant evidence of whom was discovered by Yigael Yadin more than six decades ago. Since that discovery, few important works about Bar Kokhba have emerged. Now, using information gathered from literary and archeological discoveries that have come to light since the original discovery, Powell presents a detailed and complete account of Bar Kokhba and the Second Jewish Revolt that will surely become the definitive work on the subject. Well-written, organized, and color illustrated, Powell’s book is a solid contribution to our knowledge of this important historical event.

Richard A. Gabriel, formerly at the Royal Military College of Canada and author of On Ancient Warfare.

This book is as engaging as it is informative, shedding light on the obscure leader of a Jewish revolt against Rome that marked a turning point in Jewish history. Lindsay Powell presents a fascinating and highly readable account of this revolt and its leader by interweaving evidence from archaeology and historical sources against the background of the modern State of Israel.

Jodi Magness, University of North Carolina at Chapel Hill and author of Masada.

Professor of Classical and Ancient Near Eastern Studies and Anthropology, George Washington University.