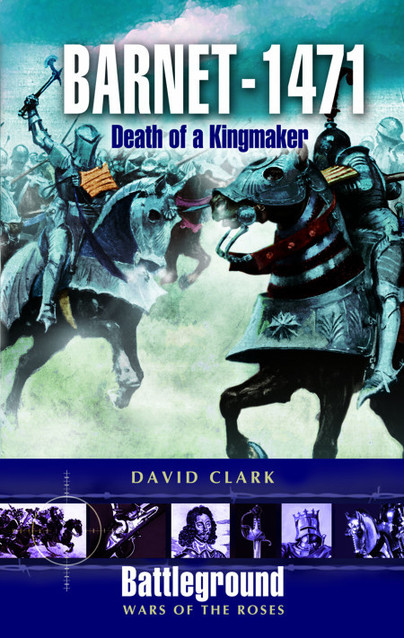 Death of a Kingmaker

Click here for help on how to download our eBooks
Add to Basket
Add to Wishlist
You'll be £4.99 closer to your next £10.00 credit when you purchase Barnet -1471. What's this?
Need a currency converter? Check XE.com for live rates

On 14 April 1471 the forces of Lancaster under the Earl of Warwick and those of York under Edward IV clashed at Barnet in Hertfordshire in one of the decisive battles of the Wars of the Roses. In a bloody encounter the two armies fought to resolve a bitter dynastic dispute that had already fuelled twenty years of war. Warwick's death and Edward's victory changed the course of English history.

In this new guide to the battle, David Clark, one of the leading battlefield historians, gives a gripping account of the fighting and of the intrigue that led to it, and he provides a full tour of the battlefield itself.

Clark’s book on the Battle of Barnet is very well written and provides a wealth of information. I would highly recommend this book to anyone who has an interest in the Wars of the Roses or military history.

The Battle of Barnet was fought in the Borough of my birth but I knew very little about it until I read this book. Very different from the WW1 and WW2 editons of the battleground series but this is only because of the lack of first hand accounts.

Just being able to walk around the battlefield, very different in North London from the 15th Century I was able feel a connection with the past and brought the battle to life in a way that just reading a book cannot.

Excellent book for those who want to walk the ground as well as learn more about the War of the Roses battle.

Having left school aged 15 no-one expected David Clark to become a senior teacher and academic. Following evening classes and then full time further education he has held numerous appointments in the academic world.

He has surveyed every major and many minor battlefield in the UK and has written a series of articles for History For All. He lives at Kettering, Northants.