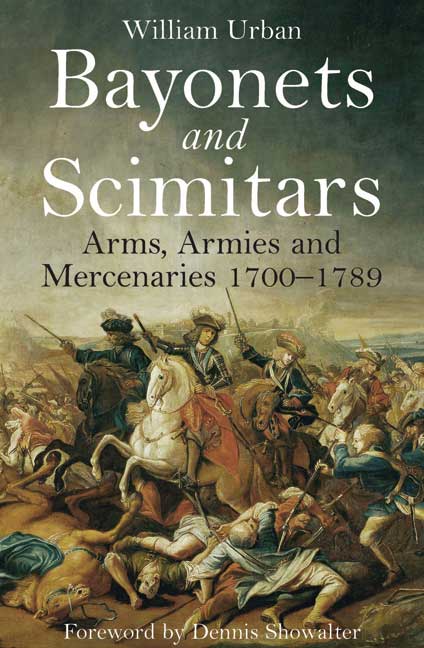 Click here for help on how to download our eBooks
Add to Basket
Add to Wishlist
You'll be £4.99 closer to your next £10.00 credit when you purchase Bayonets and Scimitars. What's this?
Need a currency converter? Check XE.com for live rates

The eighteenth century marked a watershed in European history. This was a period of significant economic, political and technological upheaval which led to the American and French revolutions, and was to ultimately pave the way for Europe's domination of much of the world during the nineteenth century.

The wars and political maneuvering of Frederick the Great and Catherine the Great transformed Prussia and Russia into major players in European politics. France, the richest nation in the West; survived losing successive wars, then bankrupted itself assisting the Americans in an unnecessary war of revenge. Britain became the model of economic and financial efficiency and made itself supreme in North America, the Caribbean, and in India, only to face such financial troubles that its leaders antagonized its colonial subjects in America.

This engaging new book by esteemed military historian William Urban traces the evolution of war-making throughout this turbulent period – the politics, the weaponry, the organisation of armies, and the transformation of mercenaries into professionals. This illuminating and highly readable account concentrates not just on high politics and military strategy, but also on the everyday experiences of those involved, giving us a fascinating glimpse into the human drama of eighteenth-century warfare.