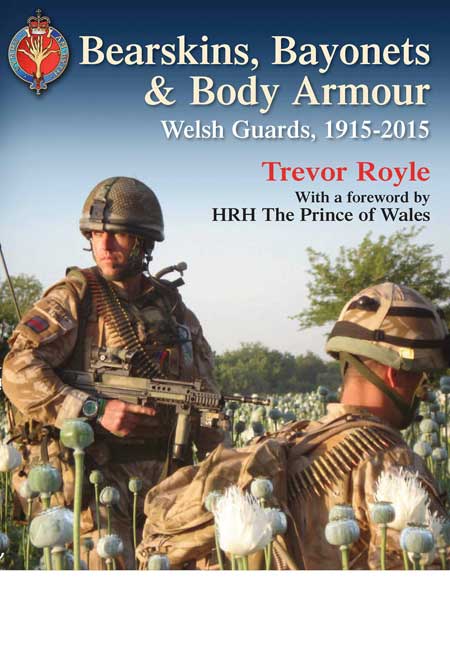 Add to Basket
Add to Wishlist
You'll be £21.00 closer to your next £10.00 credit when you purchase Bearskins, Bayonets & Body Armour. What's this?
+£4.50 UK Delivery or free UK delivery if order is over £35
(click here for international delivery rates)

The Welsh Guards have been at the forefront of British military history over the past hundred years. Bearskins, Bayonets & Body Armour traces them from their foundation in the First World War and their baptism of fire at the Battle of Loos in 1915, through their fighting at Dunkirk, in the Western Desert, Italy and Normandy in the Second World War, the Cold War and the Troubles in Northern Ireland, the Falklands War (when heavy casualties were suffered when the Sir Galahad was bombed and sunk in controversial circumstances), the Balkans, up to the campaigns in Iraq and Afghanistan in the 21st century.

As well as the Regiment's operational history, this book also offers a unique insight into its high-profile role in ceremonial events in London such as the Changing of the Guard and Trooping the Colour, which have made the Guards one of the best-known symbols of Great Britain.

This book will be required reading for all those interested in the history not just of one famous regiment, but of the British Army over the past century.

The Welsh Guards is the youngest of the five foot guards regiments and this book was timed to mark the regiment's 100th anniversary in 2015. This is a book that works on every level:

1. It works as an easy to read and informative coffee table book. This is not a book that has to be read cover to cover but rather one that can be dipped into. There is most certainly a very structured narrative format but the book is also peppered with standalone call-outs. Thus in the first half a dozen pages we see separate text on some of the battalion's personalities, the regimental choir and the regiment's uniform and insignia.

2. It works for the amateur military historian. There is a load of detail contained within these pages: order of battle, uniforms, tactics and key figures within the regiment seem to leap out from every page. Appendices list everything from regimental affiliations, battle honours and battalion stations over the years to commanding officers, senior NCOs and gallantry award winners.

3. It works as a tribute to the Welsh Guards. The book has been beautifully and lavishly illustrated throughout. HRH Prince Charles, the Prince of Wales has provided the Forward, and Trevor Royle, a vastly experienced military historian has provided the rest of the text.

This is a great book with a good bibliography and a thorough index; a very useful reference work which sits happily next to my copy of Up The Micks!

This book is packed with information, paintings and photographs of past operations and personalities. Even for non-guardsmen there is plenty to hold the reader's attention.