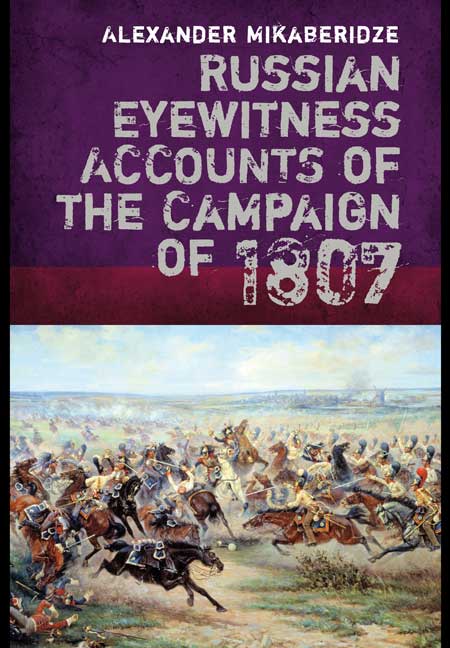 Russian Eyewitness Accounts of the Campaign of 1807 (ePub)

Click here for help on how to download our eBooks
Add to Basket
Add to Wishlist
You'll be £4.99 closer to your next £10.00 credit when you purchase Russian Eyewitness Accounts of the Campaign of 1807. What's this?
Need a currency converter? Check XE.com for live rates

After his crushing defeat of Prussia in 1806, Napoleon marched into Poland to forestall any Russian attempts to come to the aid of their ally. There then followed the bloody battle in a blizzard at Eylau on 8 February 1807, which decimated both armies. Operations resumed in the spring and on 14 June Napoleon wrecked the Russian field army at Friedland. Napoleon and Emperor Alexander met at Tiltsit, and French mastery of north-west Europe was confirmed.

This is the first book to bring together dozens of Russian letters, memoirs and diaries, with authors ranging from the commander-in-chief (Benningsen) to NCOs. We see the brutal conditions of the winter campaign at first hand, and gain fresh insight into the infamous Treaty of Tiltsit and the diplomatic manoeuvring that followed it.

There are only two maps, a few good illustrations and nearly 300 pages that are well worth reading.
Thoroughly recommended.

This carefully edited collection of eyewitness accounts of the battles between the French
and the Russians provides a balanced view but much of the information will be new to English-language
readers. There is a fine monochrome photo-plate section which adds greatly to the content, graphically demonstrating the terrible conditions under which many battles were fought. Recommended.

This unique book brings together letters, diaries and memoirs of Russian participants of the campaign of 1807, heretofore inaccessible and
underutilized, and presents a variety of viewpoints ranging from a noncommissioned officer to a commander-in-chief. It provides insight into
the Russian side of the war, how and why decisions were made, and what Russian officers and soldiers experienced as they marched towards victory. Seven chapters are: the eclipse of Austerlitz; the winter campaign, December
1806; the road to Eylau; the bloodbath at Eylau; the spring campaign; the disaster at Friedland; the aftermath of the campaign.