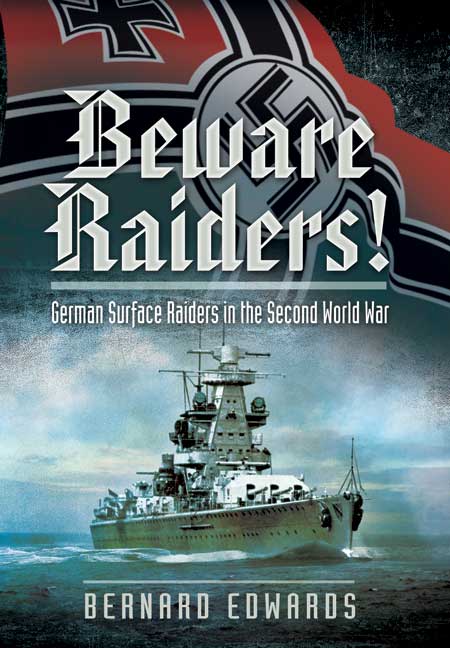 Add to Basket
Add to Wishlist
You'll be £12.99 closer to your next £10.00 credit when you purchase Beware Raiders!. What's this?
+£4.50 UK Delivery or free UK delivery if order is over £35
(click here for international delivery rates)

This is the fascinating story of two German surface raiders and the havoc they caused amongst Allied shipping in World War II. One was the 8-inch gun cruiser Admiral Hipper, fast, powerful and Navy-manned: the other a converted merchantman, Hansa Line's Kandelfels armed with a few old 5.9s manned largely by reservists, and sailing under the nom de guerre of Pinguin. Contrary to all expectations, the amateur man-of-war reaped a rich harvest and went out in a blaze of glory. Her purpose-built sister, on the other hand, was hard-pressed even to make her mark on the war and ended her days in ignominy.

The author emphasises the striking contrast between the conduct of Ernst Kruder, captain of the Pinguin, whose concern it was to cause as little loss of life as possible, and the callous Captain Meisel of the Admiral Hipper, who has scant regard for the lives of the men whose ships he had sunk.

Captain Edwards describes in detail Kruder's most audacious coup, the capture, rather than the sinking, of the entire Norwegian Antarctic whaling fleet, which he calls '"a disaster of major proportions". Equally disastrous was the havoc wreaked upon convoys HG53 and SLS 64 by the Admiral Hipper in the North Atlantic in February 1941.

The story of two German surface raiders & the havoc they caused amongst Allied shipping in WWII. One was the 8″ gun cruiser Admiral Hipper & the other a converted merchantman Kandelfels armed with a few old 5.9 guns manned largely by reservists. The author emphasises the striking contrast between the conduct of the respective captains.

A commendable and valuable book

There’s a strong narrative throughout which guides you along – essential for any truly gripping historical book. There’s enough detail so that you feel involved, and yet not so much that you feel overwhelmed by the detail.

I found Beware Raiders! to be a highly informative and captivating account of the very different careers of the two ships, HK 33 Pinguin and Admiral Hipper. Bernard Edwards does an excellent job of focusing in on the human side of the story, providing personal details and information about the captains, their crews, as well as the opposing crews they faced on their victims. Some of the accounts would strain credibility if they were to take place today in terms of the ‘chivalry of the sea’ that was practiced between the combatants and overall the story presented is a gripping one of how the war at sea was fought in the early stages. The pace of the writing and the organization of the different events moves things along easily and makes for a very entertaining read at the same time. Highly recommended to anyone with an interest in WW II naval history or even just looking to learn a little bit more about this not often talked about but important component of the battle to control the sea lanes and keep the supply lines open.

Captain Bernard Edwards spent 37 years at sea with the Merchant Navy commanding ships trading worldwide. On retirement he settled in South West Wales to pursue his second career as a Naval historian. His knowledge of the sea and ships has enabled him to write a series of internationally recognised works.