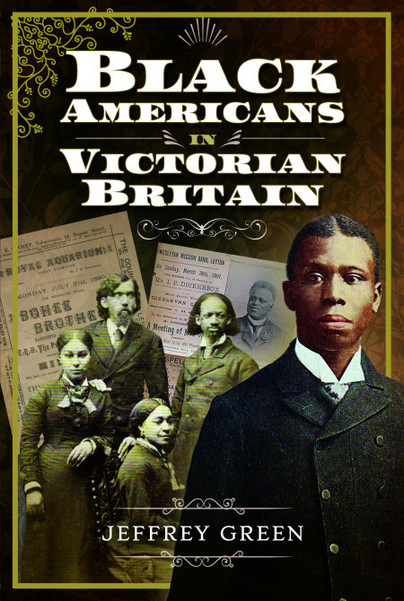 You'll be £4.99 closer to your next £10.00 credit when you purchase Black Americans in Victorian Britain. What's this?
Need a currency converter? Check XE.com for live rates

Black Americans informed the Victorian British and Irish about slavery and repression in the United States. Villages, towns and cities from Dorchester to Cambridge, Belfast to Hull, Dumfries to Brighton, also learned of their ambitions and achievements. Numerous publications were sold everywhere, and lectures were crowded. The refugees settled in Britain. Some worked as domestic servants, others qualified as doctors, wrote books, taught in schools, laboured in factories and on ships. The youngsters went to school.

This book documents refugees, settlers, and their families as well as pioneering entertainers in both minstrel shows and stage adaptions of the 1850s best-selling novel 'Uncle Tom's Cabin'. It offers new perspectives on both Victorian and Afro-America history.

One of my favourite things about the book is that Green makes you look at something that you thought you knew from a different angle... Like most Pen & Sword publications, this is an eminently readable and detailed book, with some good illustrations and further reading suggestions. While I have written about the Victorian imagery surrounding slavery (often a bit dubious and featuring a lot of bosoms), it is refreshing and sobering to read accounts of people who escaped to our country to educate us, then become an important and appreciated part of our society. It was also interesting to read how the Victorians greeted such refugees from slavery and I have to admit I was pleasantly surprised by the levels of respect paid, and quite rightly so.

I enjoyed reading the different stories of Americans escaping slavery and persecution.

Historically overlooked, Jeffrey Green explores the African-American people who travelled to Britain to escape the horrors of slavery in America.

⭐⭐⭐⭐⭐ A valuable history of black presence in Victorian Britain
I have not finished the book but I am captivated so far. It is an excellent history of black people in Victorian Britain. It's easy to read and informative with comprehensive notes, biography and index. I think it is an excellent book for students of black history and people who are researching their own family history.

⭐⭐⭐⭐⭐ Must have book for any Black American History Research

The book's cover has an immediate impact and you have to pick it up. The book is well written and describes the lives of the Black American's who visited and lived in Britain long before "The Windrush" generation.
Good for students who want to study black history and the impact the persons made in Britain.

Article: Horrific story of town’s fugitive slave as featured by

Article: 'From plantation to pulpit – the story of a former slave who became Brum's first black minister' as featured by

Jeffrey Green, a Londoner born in 1944, has researched the black presence in Britain for over thirty years. He has contributed to reference books including the Oxford Dictionary of National Biography, and appeared on radio and television. He has travelled widely in the United States.