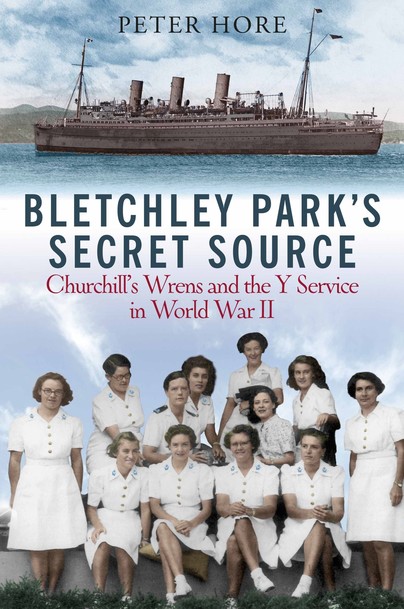 You'll be £4.99 closer to your next £10.00 credit when you purchase Bletchley Park's Secret Source. What's this?
Need a currency converter? Check XE.com for live rates

Hore’s book has publicized the importance of the interceptions by the Wrens manning these ‘Y’ outstations that made Bletchley Park so famous. For thirty years the Official Secrets Act barred our knowledge of all wireless interception. When eventually released all the credit went to Bletchley Park. For the first time this book provides fully referenced sources including many quotes from surviving Wrens interviewed by the Author that correct this oversight. An important contribution to our knowledge about how the Wrens helped shorten World War Two.

John Bingeman, Fellow of the Society for Nautical Research

“…will reward a patient reader with a remarkably intimate view into the lives and times of these hidden heroes.”

This is essential reading for anyone who is interested in the untold stories of heroic women during the Second World War.

Captain Hore is to be congratulated on an excellent book; it shines a light on a seldom covered part of the naval history of the Second World War, and does so both as a rigorous history, but also at the individual level. It is very strongly recommended.

This new book by Peter Hore, former Head of Defence Studies for the Royal Navy, especially illuminates the Y service Wrens – the operators from the Women´s Royal Naval Service.

Thoroughly researched and well-attributed with a comprehensive bibliography and extensive notes, this will probably be the definitive history of Y Service. This is the first book I have reviewed which acknowledges the impact COVID-19 has had on archives and libraries, and I can't help wondering how much material had to be sacrificed because the doors of Bletchley Park, TNA and IWM were closed whilst we all danced around each other in the streets and tried to work out how great a distance was two metres.

The story of Y Service is told in an engaging manner and benefits from first-hand accounts by those who were tasked with the listening and deciphering. There are also some great photos; many of these never previously published.

On Beeston Bump, the hill in Sheringham to the immediate south of which we now live, there is a Y-Service station, or rather there was, although the exact location is marked with an information board. It is absolutely fascinating to read about the Y-service and its contribution to what went on at Bletchley Park. Superb.

I always find it fascinating to read books about Bletchley Park and what went on there, it kind of did the hard work of the war that doesn’t get enough praise or recognition for what they accomplished. Most of the people working at Bletchley Park were women ‘Churchill’s Wrens’ a group of hardworking, diligent, and intelligent women. Working on the frontline of fighting a war from on the technical and wireless frontline. Bletchley Park was just all about the celebrated Enigma code, it was also about shipping, u-boats, convoys from all around the world. This book is full of personal individual stories from those who worked which are very good and heartbreaking in some cases. This book has been very well written by the author Peter Hore and a book I very much enjoyed. It was certainly something I hadn’t known much about before but it was great to learn about the women and men and their work.

It is a great engaging read and shows the length they went to in order to intercept signals and messages. It really does highlight stuff we don’t just think about.

I enjoyed the 8 hours I spent reading this 324-page WWII history. This was a very interesting book. I learned a lot about the Y Service. I like the selected cover art. I give this book a 4 out of 5.

I would imagine many hours of research, fact finding combined with first hand accounts of what happened during the years of listening in on radio messages made this book a labour of love. Promoting the work of women during the war, often disregarded as menial work this book really explains the sacrifice and study required to ensure this vital work is reported accurately. Explained the structure of the Y stations and global network of radio signals used during the famous war battles. Named individual Wrens whose secret efforts went unnoticed by senior hierarchy, and gave good descriptions of life at the time. This book will be wonderful for the families of those women who served their country, to understand what their previous generation achieved in what was a male world. Thankfully things have moved on and girls can aspire to be who they want to be.

For anyone who has delved into the fascinating story of Bletchley Park during the Second World War this book provides is an interesting insight into just how Bletchley Park obtained it’s raw material. Compiling a coherent account from a number of autobiographical and similar accounts presents a challenge in terms of achieving a coherent account and the author perhaps doesn’t wholly succeed. However the stories of the individual members of the WRNS, whose role it was to listen to the wireless traffic night after night for the duration of the war manage to convey a sense of the extraordinary work undertaken by these largely forgotten and uncelebrated women. Their work, and in many cases their ultimate sacrifices, makes for sober reading to those of us born after the Second World War and who have never had to face the grim realities of total war. Recommended for those who want to explore further the work of Bletchley Park and naval signals intelligence in the Second World War.

There are some lovely personal stories tales in the book. From women falling in love, to single-handedly delivering crucial signals intercepts – it really is a glorious romp... This book goes some way to setting the record straight.

Peter Hore has written an account of the way in which many women contributed to the war effort as part of the Y Service, and in some cases, after hostilities with Germany ended. It is both academic and accessible to a wider audience. I enjoyed both aspects of the book, wearing both my historian and fiction lover hats very happily as I read this genuinely satisfying account.

Decoding is a compelling subject and this book describes it in meticulous detail, often in the words of those women who did it. In WWII the women decoders, Wrens (many specialties of Wrens), were responsible for so much yet their stories are rarely acknowledged and told and far less common than others who were involved in war efforts. In fact, they often saw more action than many. Some of the duties must have been incredibly difficult (forcing alertness on night shifts) and safety but others thrilling according to documentation. Wrens only numbered in the hundreds so the job was prestigious and highly secret and the women were justifiably proud. Training was tough so only the best were successful. Bletchley Park (Station X) was at the hub and where messages were deciphered. Talk about a fascinating process!

The author describes the experiences of several women throughout the book and what happened to some after the war. He describes the (mostly awful) uniforms, samples of actual codes (one incorrect/missing word could make ALL the difference), who was sought (linguists), the history of Morse code, Churchill's involvement and scary night watch stories. One of my favourite night watch stories was that of a woman who had to go to a tower to take bearings at night. Between her and the tower was no lighting at all (she couldn't use a torch outside, either) and ditches with wires she had to navigate on her hands and knees. In daylight she saw just how dangerous of a mission it was. Another woman sometimes got back to her accommodations to find her bed was warm, obviously slept in.

Heartbreakingly, ships and boats were torpedoed and sank, including the sinking of the Empress of Canada. Stories are told of men who swallowed too much oil in the water, others clinging together and some jumping off ships and swimming away as quickly as they could to avoid being sucked under. So many harrowing experiences, all real.

Read this book told from a completely different perspective. The amount of information I learned is unreal. The photographs are great!