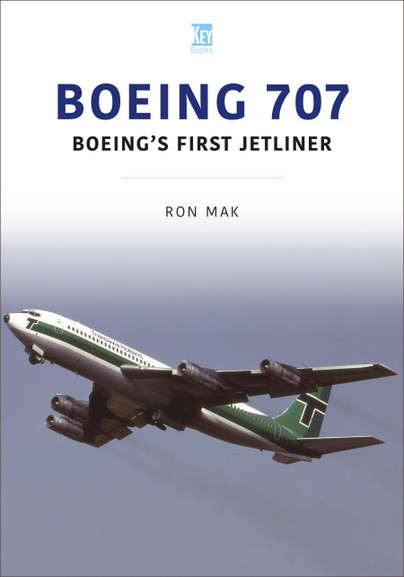 Preorder
Add to Wishlist
You'll be £12.79 closer to your next £10.00 credit when you purchase Boeing 707: Boeing's First Jetliner. What's this?
+£4.50 UK Delivery or free UK delivery if order is over £35
(click here for international delivery rates)

The first widely used commercial jet, the Boeing 707 brought America into the ‘Jet Age’ of the late 1950s and created the template for worldwide air travel today. The 707 first flew on 20 December 1957, and less than a year later it made its first commercial flight from New York to Paris. Initially flown mainly by Pan American, the Boeing 707 was soon operated by both domestic and international airlines around the world, and the popularity of the aircraft led to increased development of air-traffic-control systems, airport terminals, runways and airport infrastructure.

The 707 remained in production until late 1978, by which time it was too small to handle the increased passenger densities on many routes, and it was retired to make way for more-modern jetliner types. By the end of production, a total of 1,010 aircraft had been built for civil use, though many of these subsequently found their way into military service, and purpose-built military variants remained in production until 1991.

This book provides a fascinating portfolio of images depicting a wide range of Boeing 707 variants in service around the world, in passenger, cargo and military use. Like the aircraft itself, the photographs, taken at airports in North, Central and South America, Europe, Africa, the Middle East and Asia, span the world, showcasing many of the aircraft’s diverse and colourful liveries.