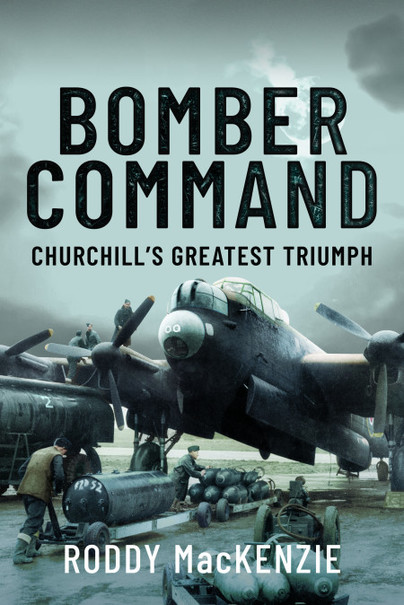 Preorder
Add to Wishlist
You'll be £16.00 closer to your next £10.00 credit when you purchase Bomber Command. What's this?
+£4.50 UK Delivery or free UK delivery if order is over £35
(click here for international delivery rates)

Roddy MacKenzie’s father served in Bomber Command during the Second World War, but like so many brave veterans who had survived the war, he spoke little of his exploits. So, when Roddy started on his personal journey to discover something of what his father had achieved, he uncovered a great deal about the devastating effectiveness of Bomber Command and the vital role it played in the defeat of Third Reich. He realised that the true story of Bomber Command’s achievements has never been told nor fully acknowledged.

Roddy became a man on a mission, and this startlingly revealing, and often personal study, is the result. Bomber Command: Churchill's Greatest Triumph takes the reader through the early days of the Second World War and introduces all the key individuals who turned the Command into the war-winning weapon it eventually became, as well as detailing the men and machines which flew night after night into the heart of Hitler’s Germany.

The main focus of his book is the destruction and dislocation wrought by the bombing to reduce, and ultimately destroy, Germany’s ability to make war. In his analysis, Roddy dug deep into German archival material to uncover facts rarely presented to either German or English language readers. These demonstrate that Bomber Command’s continual efforts, at appalling cost in aircrew casualties and aircraft losses, did far more damage to the Reich than the Allies knew.

Roddy’s father served with the Royal Canadian Air Force and Roddy naturally highlights its contribution to Bomber Command’s successes, another aspect of this fascinating story which the author believes has not been duly recognised.

Bomber Command: Churchill's Greatest Triumph will certainly raise the debate on the controversial strategy adopted by ‘Bomber’ Harris and how he was perceived by many to have over-stepped his remit. But most of all, this book will revise people’s understanding of just how important the endeavours were of those men who flew through the dark and through the searchlights, the flak, and the enemy night fighters, to bring the Second World War in Europe to its crushing conclusion.

Born and raised in Calgary, Alberta, at the age of twenty-eight RODDY MacKENZIE became the City Solicitor for the Royal City of New Westminster. By the time he retired, the law firm he created represented over 50 local governments throughout BC and Roddy was also an Adjunct Professor of Law at UBC. A speaker, writer and world traveller, having visited some seventy countries, Roddy is an historian with a particular interest in Bomber Command and the events of the Second World War.