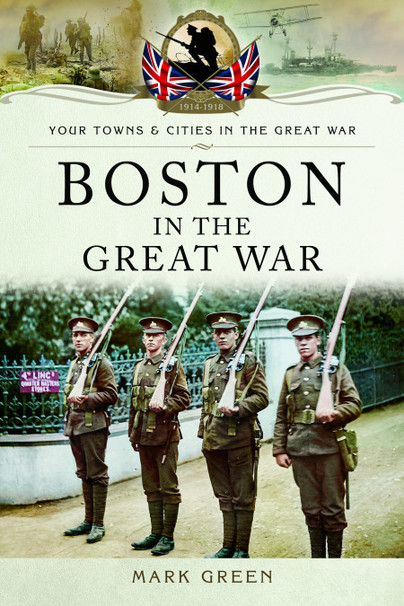 Boston in the Great War (Paperback)

Add to Basket
Add to Wishlist
You'll be £14.99 closer to your next £10.00 credit when you purchase Boston in the Great War. What's this?
+£4.50 UK Delivery or free UK delivery if order is over £35
(click here for international delivery rates)

Boston’s rich history climaxed in 1914 with arguably the first British casualties of the First World War when the town's trawler boats were sunk in the North Sea. Men, sons and fathers, lost in someone else’s conflict, found themselves victims of a figurative storm that no weathered sailor could have foreseen.

This small town was affected in many other ways during those long, hard years of the Great War. Boston’s other traditional industry, farming was decimated of its workforce when men joined up in their hundreds to answer Kitchener’s call or to fight alongside their brothers when the eager territorial force was called into action. Biographical accounts bring to life what existence was really like in those dark days of some of the most ferocious fighting encountered in the fields of France and Belgium. Both men and women recite their varied and colourful stories, all brought alive by their humour, resilience, extreme kindness and love of this unique town.

Boston was also one of the few towns that fought on every front, the real and dangerous threat of the notorious German High Sea Navy when the Navy’s code of conduct evaporated under pressure from the German Admiralty, to the threat of the aerial menace forged in the mind of Count Ferdinand Von Zeppelin and then onto the grim battlefields of Europe. Whilst at home the women, tendered the wounded, farmed the land and enthusiastically challenged the status quo of male orientated labour.

Surviving these horrors was a testament to a town built on values that outweigh anything that would try to diminish the free will of a determined community. Amongst other memorials in the town and surrounding areas, a square base on a chamfered plinth bears the names of the fallen with the timeless epitaph in the gardens:

'Walk in this garden of peace and remember. When you go home, tell them of us and say, for your tomorrow we gave our today.'


During a year which has seen us honour the centenary of The Great War, Mark Green's book on the subject produces a fascinating and relatable local take on the subject.