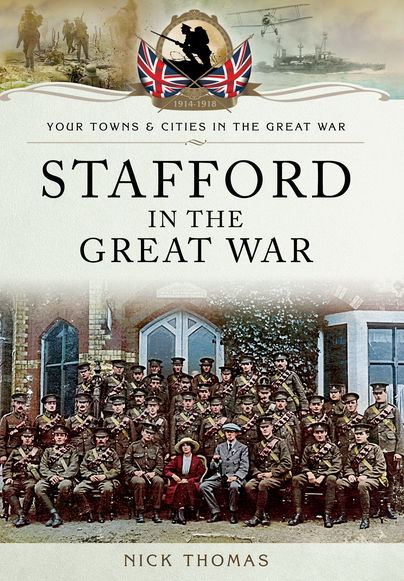 Stafford in the Great War (Paperback)

Add to Basket
Add to Wishlist
You'll be £10.49 closer to your next £10.00 credit when you purchase Stafford in the Great War. What's this?
+£4.50 UK Delivery or free UK delivery if order is over £35
(click here for international delivery rates)

Stafford in the Great War tells the fascinating story of a county town and its people between the catastrophic years of 1914-18 .

The title was written as a companion volume to the author's earlier work, Stafford at War 1939-45, and adopts the same successful formula. The book examines the work of local men and women on the Home Front, before providing details of the towns contribution in every theatre of the war.

Early chapters examine the role of Staffordians who served in the British Expeditionary Force, nicknamed The Contemptible Little Army by Kaiser Wilhelm II, and who took part in the Christmas Truce, 1914. The story of the Stafford Territorials of the Stafford Battery, the Staffordshire Yeomanry and the North and South Staffordshire Regiments is also explained, along with the fate of Kitcheners Volunteer Army.

The events surrounding the service of a number of local men are recorded in some detail, along with the exploits of men who fought in all of the armed services and support units. Collectively, their stories help outline the course of the war.

Staffordians won 120 gallantry awards during the conflict, and those that are not referred to in the main body of the text may be found in an appendix. Also listed are the names and service details of over 400 men whose names were omitted from the towns war memorial.