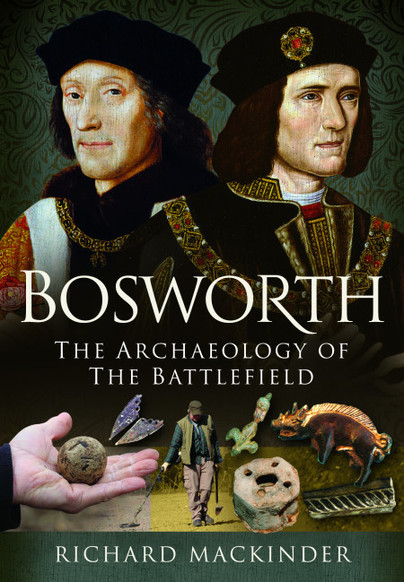 Add to Basket
Add to Wishlist
You'll be £17.50 closer to your next £10.00 credit when you purchase Bosworth. What's this?
+£4.50 UK Delivery or free UK delivery if order is over £35
(click here for international delivery rates)

"This book is a useful addition to
our understanding of the battle.
I recommend Ricardians to
have a good look at it."

A very good historical book on the battle of bosworth and what the outcome of the battle meant to the victors and the losers. Very well researched facts are brought to life. I would recommend this book to anyone who likes a good historical read.

The book is however well illustrated and offers an excellent guide to walking the battle and related sites, which would I feel be useful both to a regular visitor and somebody who was there for the first time. There's a mass of tables, graphs etc relating to the various finds.

This book is an interesting mix of accessible reading for the history buff and armchair archaeologists, detailing the discoveries and lists findings made during the archaeological surveys conducted over the course of several years.
While it helps bring to life the difficulties of King Richard III’s final battle and the logistics of it from all sides, one of the greatest things I think this book does, is to remind the reader that while history has happened, we are constantly making new discoveries about it.
The well written and interesting self guided walking tour provided within, helps remind us that history is still all around us.
A good read for Ricardian enthusiasts and those interested in battlefield archaeology.

The book includes a self tour of the site, and provides a walking trail with key elements highlighted on route. I think that is worth the price of the book in and of itself if you are interested in the period and walking the battlefield.

Said to be one of the key battles in English history, this book does go a long way to explain the battle and its current battlefield archaeology.

This could also be useful for any wargammers looking to recreate the battle or parts of the battle.

Pen and Sword seem to have a really great track record in publishing very well- written and thoroughly researched historical books. This was no exception. A fascinating study of a fascinating historical event.

Those of us who conduct clients around various battlefields are always aware, if we are conscientious and serious about our craft, that history is fact and interpretation is uncertain. Our biggest concern is “am I communicating the best available information or am I simply repeating something I read in a book, or worse still, repeating perceived history”.
The author has clearly shared the common need to test interpretations and to drive towards a balanced view based on the best source material and not simply repeat the shibboleths of past historians no matter how respected. This book succeeds in every respect and is not in any way a dry academic analysis. His experience of working on the Bosworth battlefield and his research using modern techniques has produced a masterpiece of analysis, and from that, alternative and compelling insights into the battle. I thoroughly recommend this excellent book.