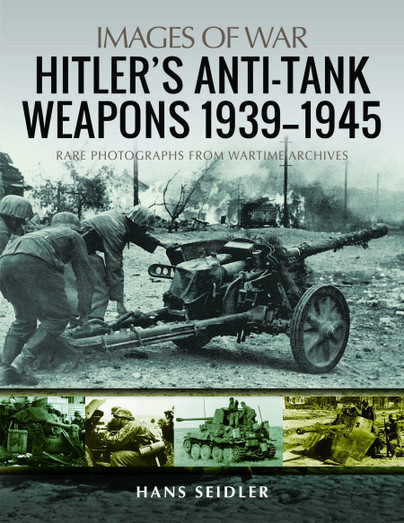 Hitler’s Wehrmacht and SS units will be remembered for their aggressive ‘Blitzkrieg’ tactics. But, as the war progressed, the Germans, recognising the offensive capability of armoured warfare, developed an impressive range of anti-tank warfare weaponry and munitions.

Using many rare unpublished images this Images of War book covers the full Nazi anti-armour capability from the 3.7cm Pak 35, 5cm Pak 38 and 7.5cm Pak 40 to the versatile 8.8cm Flak feared by the Allies. Also featured are the half-tracks and converted Panzers that pulled or mounted these weapons and carried forward observers and reconnaissance elements.

Later hand-held anti-tank weapons came into service and were effective and economic against Allied armour. The Panzer faust, with its shaped charge warhead, became the first disposable anti-tank weapon in history.

This comprehensive book shows this formidable range of weapons in action from Poland in 1939, through North Africa and the Eastern Front to the final collapse in 1945.

First-class documentation for the historian and modeler.

Lots of interesting photos. Enjoyed it.

This is another excellent addition to a fine series and one that I can easily recommend to both the historian and modeler alike.

This offering from Pen and Sword is part of the Images of War series provided me with what I expected from a title such as this. The text is minimal but does a good job of introducing each section of the book. I like that the photographs are not all propaganda and training offerings as those taken in the field may not be as sharp but they provide reference and details the other two types of image would not. For the artily fan out there this book offers a great visual reference title at a very reasonable price.

The very popular Images of War continues to grow, this time take on the subject of German Anti-Tank guns throughout WW2. The German military made good use of these weapons in combat through the whole period of the war, and the book also makes clear the evolution they went through over that time. From the small towed 37mm Pak 36 through to the large Pak 43 and the hand held infantry weapons like the Panzerfaust which were in use in the second half of the war.

Today's book, with excellent photos, tries to accurately document (thanks to interesting captions) the evolution of German anti-tank artillery. It is obvious that many tank destroyers and their field versions and modifications are not documented, but the result is to get to know better, with even rare photos, many of the artillery pieces used during the war and to distinguish their characteristic features. This work is therefore very useful for the historical enthusiast but also for the model maker.

The supporting text is excellent, and I did like the highly detailed captions. These captions indicate various features of the photos to look at in more detail. This book will be ideal for those requiring detailed imagery of wartime German anti-tank weaponry or for those who want to know how anti-tank troops went about their important duties. I loved it and I am sure you will too.

Yet another storming book to the Images of War stable, which I really do enjoy and recommend to everyone. This book is all about the weapons used by the Germans against enemy tanks, from the vehicles to the hand held anti-tank weapons. The chapters are split into early years, operations in Russia, Stop Gap solutions, 1943 and ‘The End’. There are also three Appendixes at the back listing all the relevant weapons created and used. Whilst most will be known to the regular military history reader, some are bizarre but then this would happened on both sides of a conflict as sides try to gain an edge upon the other.

Again the photographs provided in the book are excellent and really do suit the book, with weapons on show and being able to see soldiers being trained in the use of the weapons. It also clearly shows that as country starts to run short of materials they then move on to producing smaller weapons and in this case anti-tank weapons. In all I can’t really complain about these books in this series because they are always so well written, each author is clearly chosen for his expertise and it is no different in this case. Each photograph is clearly explained and we follow the course throughout the book of the evolution of anti-tank weapons. This is another thoroughly good book that I have read, I’m looking forward to the next one already.

This is an easy to read, well illustrated and highly enjoyable addition to the very useful Images of War series. I love it!

This book offers excellent images coupled with text that explains the evolution of German anti-tank weapons and their tactical use. The section on the development and use of the Panzerfaust and similar weapons that added close range capability is particularly well explained.