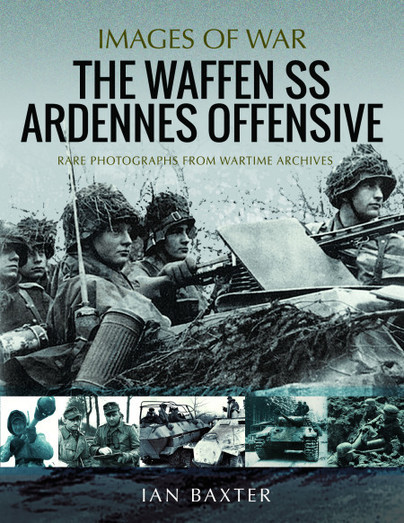 Add to Basket
Add to Wishlist
You'll be £12.00 closer to your next £10.00 credit when you purchase The Waffen SS Ardennes Offensive. What's this?
+£4.50 UK Delivery or free UK delivery if order is over £35
(click here for international delivery rates)

In late 1944 under extreme pressure on both the Eastern and Western fronts, Hitler realized he needed to force the Allies into negotiating a truce thereby saving Germany from total defeat. Using the Christmas period to enhance the vital element of surprise, he ordered a devastating attack through the rugged and mountainous Ardenne region with the key Allied port of Antwerp as the objective.

This book, with its extensive text and rare and unpublished photographs with detailed captions, tells the story of the Waffen-SS offensive, known as Wacht am Rhein (Watch on the Rhine). These formidable SS armoured units with supporting Wehrmacht divisions initially achieved dramatic success making full use of the harsh winter conditions and terrain. Gradually the Allies regained the upper hand on the attackers who were increasingly suffering from lack of reinforcements and resupplies. After defeat at the pivotal battle of Bastonge, remaining Waffen-SS units withdrew and were transferred back to the Eastern Front. As described in this classic Images of War book, the Fuhrer’s gamble so nearly paid off and the ruthless fighting spirit of the elite Waffen-SS divisions caused the Allied command serious concern.

The book contains many fine pictures from the German side with not only pictures of soldiers and their officers, but we can also see the equipment that they were using.
This is once again a classic book by Ian Baxter and depicts the Waffen-SS in the Last Chance Saloon.

The text is helpful although the account of the Baugnez shootings seizes on a fairly simple approach. Also on page 37 captioning asserts that a row of four steel helmets on the side of a half track were placed there to augment the armour protection of the vehicle.!

Another interesting selection of images in the book, lots of inspiration and reference for modellers.