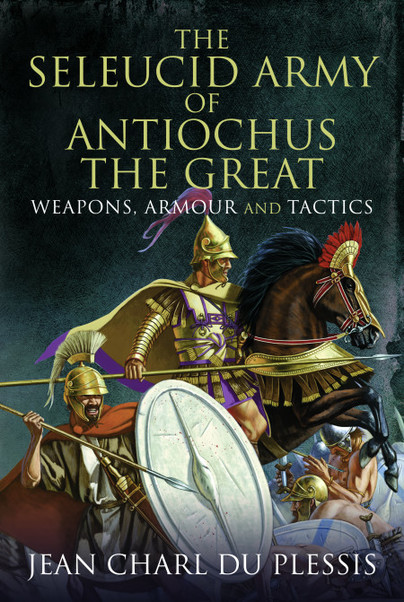 The Seleucid Army of Antiochus the Great (Hardback)

Preorder
Add to Wishlist
You'll be £20.00 closer to your next £10.00 credit when you purchase The Seleucid Army of Antiochus the Great. What's this?
+£4.50 UK Delivery or free UK delivery if order is over £35
(click here for international delivery rates)

The Seleucid Empire was a superpower of the Hellenistic Age, the largest and most powerful of the Successor States, and it’s army was central to the maintenance of that power. Antiochus III campaigned, generally successfully, from the Mediterranean to India, earning the sobriquet 'the Great'.

Jean Charl Du Plessis has produced the most in depth study available in English devoted to the troop types, weapons and armour of Antiochus’ army. He combines the most recent historical research and latest archaeological evidence with a strong element of reconstructive archaeology, that is the making and using of replica equipment.

Sections cover the regular, Hellenistic-style core of the army, the auxiliaries from across the Empire and mercenaries, as well as the terror weapons of elephants and scythed chariots. Weapons and armour considered in great detail, including, for example, useful data on the performance of slings and the wounds they could inflict, drawing on modern testing and the author’s own experience.

The army’s performance in its many battles, sieges and campaigns is analysed and assessed.

Dr Jean du Plessis recently completed his doctorate in ancient history and was recommended to publish his thesis (this book). As well as traditiomal academic research, Jean puts great value upon practical research and ‘experimental archaeology’. He practises traditional slinging and archery, and was placed second in the South African National Traditional Archery Championships in 2008. He is also an avid Historical European Martial Artist (HEMA) and was placed 1st in the 2007 and 2008 National Championships in both sword-and-shield and longsword.