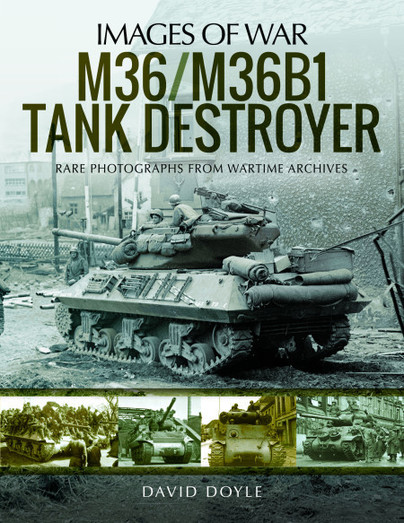 Going into WWII, the prevailing strategy of the US command was that takns were not to be used to engage enemy tanks in combat. Rather, tanks were to be the armored spearhead to breach enemy positions. Enemy tanks were to be dealt with by specialized weapons, aptly named tank destroyers.

While the 3-inch weapon of the M10 was superior to that found on earlier US tank destroyers, it was still found to be inadequate against the ever-increasing weight of German armor. An even larger gun, the 90mm M3, was placed in a new, bigger open-topped turret on 100 new hulls purpose built for this, and by remanufacturing M10A1s, primarily from US-based training units. As the supply of these chassis was depleted, additional vehicles were created by converting Diesel-powered M10s, resulting in the M36B2. The M36B1 was built from the ground-up as a tank destroyer, using a hull based on that of the M4A3 but featuring a standard M36 turret. Examination of rare surviving vehicles indicate that the M36B1 hulls were manufactured expressly for this purpose, and were not merely M4A3 hulls that were converted.

While US antitank doctrine changed, rendering all the tank destroyers obsolete post-WWII, many of these vehicles were supplied to other nations, and in fact some survived as combat vehicles into the 21st century.

"In summary this is an excellent source of comprehensively captioned photographs of the M36 and M36B1."

As usual, the books in this series present excellent photos (and here we also have many in color!) with very detailed captions that provide valuable information. This is another book by David Doyle that cannot be missed in the collection of armored vehicle enthusiasts.

Pure and hard documentation that will delight vehicle modelers at scale.

Books like this are a must for model makers and there is always the possibility you might be restoring the real thing and need a handy reference.

What I really like is the section on the M36B1, a model I previously knew nothing about.
There is stuff to learn here and the real bonus is that the book finishes with a package of colour shots showing a rare surviving example of the B1.

So, what we have is a solid look at the M36 family with Mr Doyle’s no-nonsense methodology. It makes for a straightforward recognition book of the old school that is well worth a look. There was a time when truncated versions of this sort of thing appeared in dedicated magazines, but for the sake of a few more quid we get a much more comprehensive product. I make that a win.

The latest in Pen and Sword's Images of War series takes an in-depth look at the M36 Tank Destroyer. Brilliant photos of this amazing specialised vehicle and its various wartime campaigns.

As a replacement for the under gunned M10 "TD" the Americans developed the 90mm Gun Motor Carriage, M36, which first saw combat in the war in Europe in October 1944. In this latest release by Pen & Sword in their Military series, Images of War, David Doyle provides an introduction and a chapter each on the two basic variants, the M36, which either had a purpose built hull or a re-manufactured M10A1 hull, and the M36B1, based upon a Sherman tank hull. In his 121 pages there are 62 wartime black and white photos of the M36 and 6 of the -B1 variant. There are 84 colour detail photos of extant M36 machines with 21 colour photos of two preserved M36B1s. Mention is made of the -B2 diesel variant and the British modification, M10 SP Mark 1C (Achilles). This tank destroyer served in WWII, Korea, Vietnam, the Balkans and even encountered in the war in Iraq (ex-Iranian machines). It has served in many armies. It's an excellent reference with a wealth of well captioned detail photographs showing field modifications and many subtle differences.

The author, an armour preservation specialist has delivered a beautifully researched and illustrated book, many illustrations being in full colour. – Very Highly Recommended

The book is a selection of excellent photographs with accompanying text... Printing is to Pen & Sword’s usual high standard.

This is another fine addition to the Images of War series for Pen & Sword by author David Doyle. He takes on another WW2 era US AFV in the form of the M36/M36B1. This was a progression from the M10 tank destroyer, which saw it being fitted with the 90mm gun, to enable it to cope with the larger German AFVs of the later war period.

The period black and white photographs are very well captioned and have been well chosen for the clarity of them. I feel these images will best serve the modeller who wishes to depict a specific vehicle at a specific time and place. Details such as marking can be picked out as can the collection of comforts that often get added. There are a series of photographs that show an M36 that rolled over while being towed and these will make excellent reference for those wishing to make a diorama of it rolled on its side or after it had been righted. There is also a very nice photograph showing the effect on winter white wash applications that could make for a visually stunning model.

Personally I love these books, and find them both very inspiring and very useful in relation to my modelmaking and wargaming hobbies. Definitely recommended.