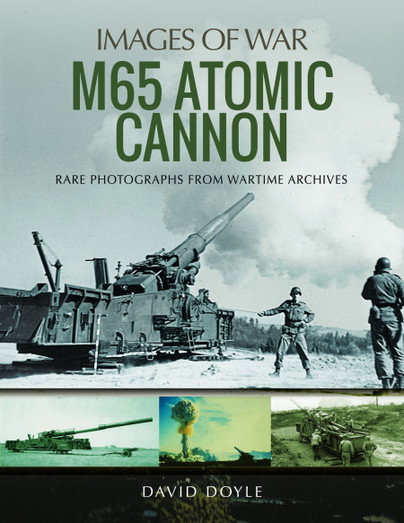 Add to Basket
Add to Wishlist
You'll be £15.99 closer to your next £10.00 credit when you purchase M65 Atomic Cannon. What's this?
+£4.50 UK Delivery or free UK delivery if order is over £35
(click here for international delivery rates)

Through historic photos, this volume traces the development, production and deployment of this iconic piece of military equipment from the drawing boards to the Cold War battlefields of Europe.

In 1949, the US Army wanted an artillery gun that could fire a nuclear warhead in the event that guided missiles and long-range bombers proved insufficient in delivering atomic weapons. The result was the M65, 280mm Atomic Cannon. On May 25, 1953, at 0830 hours, an M65 of A Battery, 867th Field Artillery Battalion, let loose with the only nuclear round the type would ever fire.

Six battalions of the M65 would eventually be deployed, most in Europe with one battalion sent to the Korean Peninsula. Though never used in combat, they served as a significant tactical nuclear deterrent in the early stages of the Cold War.

Every single detail of the weapon is eviscerated by often large-format images, a fact that will surely be appreciated by students of this subject, post-war artillery scholars and model makers.

Yet another beautiful Images of War series book and a perfect accompaniment for Dragon Models M65 Atomic Annie Gun kit. As the series title suggests, this book is overflowing with images and with some great ideas for dioramas.

There are a lot of high quality images... an absolute must for modellers.

The Images of War series continues with David Doyale taking a look at the M65 Atomic Cannon, a fearsome piece of tracked artillery celebrated in some style in David's book.

There are a number of models available of the M65 Atomic Cannon and if you were going to build one, then this would be the ideal companion.

This will appeal to anyone with a general interest in large ordnance and anyone building a model of one, in whatever scale.

I think this will appeal to anyone with a general interest in large ordnance and anyone building a model of one, in whatever scale.

The author has delivered a beautifully researched and illustrated book covering the unique US Atomic Cannon, the apex of US heavy artillery development. – Very Highly Recommended

David Doyle, a military vehicle enthusiast, has come up trumps with a complete record of the M65; I found the book fascinating and will certainly be making my way to see 'Atomic Annie' (all M65 cannon had their own nicknames and 'Atomic Annie' was the gun that fired 'Shot Grable') next time I am in Fort Sill.

With its loaded length of 71 feet one can imagine the problems of negotiating small village roads, even with "push-me, pull-you" tractor units. Although only one 15kt warhead was ever fired, it stood guardian until rockets and smaller atomic rounds for conventional artillery were developed. Scale modellers will find this book invaluable and anyone interested in the Cold War will find it fascinating.

An interesting weapon of the Cold War era and great detail for the modeller who may wish to add more of it to the 1/72 scale model that has been produced by Dragon Models in recent years. Another very good book for the military vehicle/artillery enthusiast from author David Doyle.

Thanks to this book I believe that the M65 atomic gun received the attention it deserved.

This weapon was never used in anger or as far as I am aware anything more than a deterrent to the Eastern BLOC countries and so I found the period pictures a really nice inclusion. It is also for this reason and the fact that it is just such a huge piece of equipment that the in detail section with the walk around and close ups is so valuable. The captions that accompany these images are really helpful as I feel it would prove next to impossible for the average person to know exactly what aspect of the vehicle they are looking at. In finishing this book and for that matter the series, offer fantastic value for money regardless of where your interests lay or the reason you have an interest.