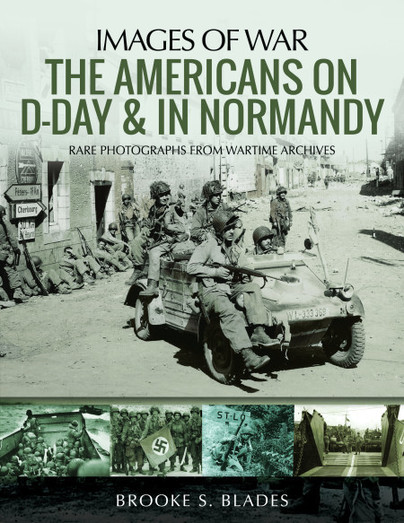 The Americans on D-Day and in Normandy (ePub)

You'll be £4.99 closer to your next £10.00 credit when you purchase The Americans on D-Day and in Normandy. What's this?
Need a currency converter? Check XE.com for live rates

The experiences and achievements of the United States land, sea and air forces on 6 June 1944 and the weeks following have been deservedly well chronicled. Omaha Beach saw the fiercest fighting of the whole OVERLORD invasion and the opposition faced in the US sector shocked commanders and men at all levels. The outcome was in the balance and, thanks to the courage and determination shown by the attackers, game-changing failure was narrowly averted.

This superb Images of War book examines, using contemporary and modern images and maps, the course of the campaign and its implication for both the American troops and the civilian population of the battlezone.

These revealing images, both colour and black and white, are enhanced by full captions and the author’s thoroughly researched text.

The result is a graphic reminder of the liberation of Northern France and the extraordinary sacrifice made by men not just of the United States military but the other Allied nations.

The Americans on D-Day and in Normandy offers a rare, poignant visual into the human struggle unfolding on the beaches and soil of a soon-to-be-liberated Europe.

We have undoubtedly been blessed by this and other recent additions to the D-Day histories; especially in the photographic and mapping realms. This sort of extra mapping material is often invaluable to the wargamer.

The photos in this book were amazing, and I loved how it wasn't just pictures with no information. The stories played in your mind, the triumphs and the heartaches. I was so emotional looking through the pages, and it took me a few days to get through it. This history is so important, and I'm so glad it's been so well documented.

They say a picture is worth 1000 words. This book is hauntingly beautiful and brings to life stories that shaped the lives of our grandparents. A million words in photos. I had a REALLY hard time looking at it because in short, it’s truth. A great coffee table book and an excellent gift choice.

It is excellent, is packed with information and illustrations, and should be on the wanted list of anyone with any level of interest in the Invasion and Battle of Normandy in 1944. Oh, and at a recommended £15.99, it’s a bargain!

By reading the book one gets a good impression of the entire (American part) Overlord Operation (initial phases). The book takes the reader from the embarking in the UK to the actual attack on the Omaha and Utah beaches, followed by the struggle to deepen the bridgehead and finally break out to attack Cherbourg and move south towards St. Lo.

Another excellent and worthy book in this series!

The best of these Images of War books are really great resources for wargamers, modellers and military history buffs when, as here, they're packed with great photos, accompanied by illuminating text. The pictures are admittedly all black and white - and the US was one of the few participants, alongside Germany - to make frequent use of colour film in WWII. But it's really nice, as well as useful, to have such rich visual material as this to hand in print form, as opposed to trawling the web for it.

I'd definitely recommend this to anyone with more than a passing interest in the U.S. role in D-Day and beyond.

Several of the images are not only interesting for military historians but are just magnificent as photographs - I was just amazed I had not seen these before. Several maps and after the battle photographs make this book a must also to bring along on my next trip to Normandy.

The author has supported the usual fine selection of images with well-researched text in introduction, explanation and in captioning. Another very successful addition to a fine series of books on military history.

The book uses a wide range of archive photos, making use of those images captured by US military photographers and a few from the Bundesarchiv as well. Added to these are plenty of modern day location comparisons, maps and aerial photos from the time compared to modern day Google Earth imagery, which create some interesting comparisons. It also makes a point of considering how the casualties were handled, the treatment and evacuation of the wounded as well as how they handled the deaths, and establishment of the various War Cemeteries... A knowledgeable text which does focus on elements which as so often ignored/overlooked.

The book is a significant collection of photographs taken by primarily US Signals Corps photographers in Normandy from the initial landings through to the breakout in August 1944. It is supplemented by photographs from the Wermacht archives and from the US press photographers who landed with the assault troops.

This book is not just a collection of photographs of the US landings in Normandy. It offers excellent context and commentary on the photographs and makes efforts to correct the inevitable concurrent confusion in dating and timing the photographs in the confusion of battle. In doing so a more critical interpretation emerges and the narrative, which is sparing but very focused, and delivers much enlightenment on the events, particularly those of June 6th 1944.

The author’s object was not to deliver simply a montage of images however compelling. He wanted to assist in providing a ‘material anchor for memory’ in interpreting those epic events and in connecting them to the landscape. As a battlefield guide who constantly seeks to explain the context rather than repeat the narrative this book will become invaluable. Many of the photographs can be attributed to specific locations and add significantly to understanding those locations and their context. Some images have modern comparison photos to assist with this. There are also good maps and sketch maps from other sources which add much value. The sketch map by Shea of the landings on Dog White and the move inland to take Vierville is very welcome.

Overall an excellent book and one that could be a constant companion for this battleguide on Normandy tours. Also a good balanced read for the general reader interested in the Normandy landings in the US sectors.