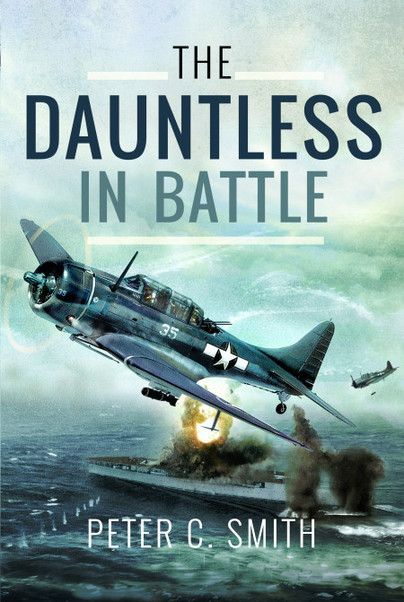 The Dauntless in Battle (Hardback)

Add to Basket
Add to Wishlist
You'll be £10.00 closer to your next £10.00 credit when you purchase The Dauntless in Battle. What's this?
+£4.50 UK Delivery or free UK delivery if order is over £40
(click here for international delivery rates)

The Douglas SBD Dauntless, a monoplane dive-bomber designed by Ed Heinemann for the United States Navy and United States Marine Corps, arrived in service in the months just preceding America’s entry into World War II. The first such aircraft were being shipped out to the USMC units just as the Japanese Task Force arrived in position to launch their attack on Pearl Harbor, while those Dauntless embarked aboard the American aircraft carriers of the Pacific Fleet became among the very first casualties of that surprise attack.

Very quickly the Dauntless established herself as a highly accurate naval bomber at sea. However, when the Army Air Force adopted the type (as the Banshee) they lacked the Navy’s expertise at this method of attack and the hastily-deployed units that tried to stem the tide of enemy victory in the Dutch East Indies were overwhelmed and took heavy losses, which gave the USAAC the excuse to abandon the type.

The US Navy and Marine flyers fared quite differently. In the early raids on Japanese-held islands - and in 1942 at the naval battles of the Coral Sea and Midway, Eastern Solomons and elsewhere - she proved herself a key and decisive instrument to first halt and then turn the die against Japanese expansion. The SBD (nicknamed ‘Slow But Deadly’) fought ashore the bitter fighting a Guadalcanal and the subsequent Solomon Island campaigns working from both shore and carrier bases.

The Royal New Zealand Air Force also formed a squadron with this aircraft that fought at Bougainville with distinction. The Dauntless continued to fight a sea until right up to 1944 and then carried on with the Marine Corps to provide the American Army with close air support in their conquest of the Philippines. The Dauntless also served with the French Air Force and Navy in North Africa, Europe and, post-war, in Vietnam.

This is her story.

This new book from author Peter C. Smith is a very detailed account of the combat history of this famous US dive bomber. It starts with some background to the Dauntless coming into service with the US Navy, but it doesn't go into the very detailed development story, this one keeps a clear focus on the combat history of the type.
It start right at the outset of the war, when some scouting aircraft from the USS Enterprise were directed to a ground landing on Oahu, but where they arrived to find themselves caught up with the Japanese aircraft attacking Pearl Harbour. So, it really does start at the beginning. The remainder of the 9 chapters moves chronologically through the story, with the Battle of the Coral Sea in May 1943; the famous Battle of Midway; Derailing the Tokyo Express supply line; Two Carrier Duels. Then a slight change as it moves to include the story of the Dauntless in action with a New Zealand 25 Dive Bomber squadron that flew them, 'Kiwis at Bougainville 1944'. Then Vindication at the Philippine Sea and finally switching to the USMC use of the Dauntless, also in the Philippines, 1944-45. The Marines very successfully operated the aircraft in flying close-support dive bombing missions close to the front line troops, a task which hadn't always been reliably done by others.
Throughout the book there are plenty of tables, listing aircraft and crew on specific missions, and detailed descriptions of those missions, and the fate of many of the crews. It was replaced in US Navy service before the end of the war but I still picked up on a number of details, including a reminder that it was one of the few US carrier based aircraft not to have a wing fold mechanism. A well focused account and lots of fine detail on both the aircraft and the crews who flew them in action.

This offering from Pen and Sword, authored by Peter C Smith provides an informative look at the Dauntless in action.

A rare book that is written with love.
It not only deals with the plane itself but also its combat history in the Pacific.
The author shows his love for the aircraft and also for the battle record of this strange aircraft.
It is really recommended for those with a love for aviation and also for the Pacific war.

This is a very welcome updated and expanded edition of a best selling book published in 1997. The author has produced a extensively researched complete history of the famous SBD Dauntless dive bomber, hero of the Battle of Midway . – Very Highly Recommended.

It’s well written and researched, not to mention the excellent photographs showing operational aircraft of the period.