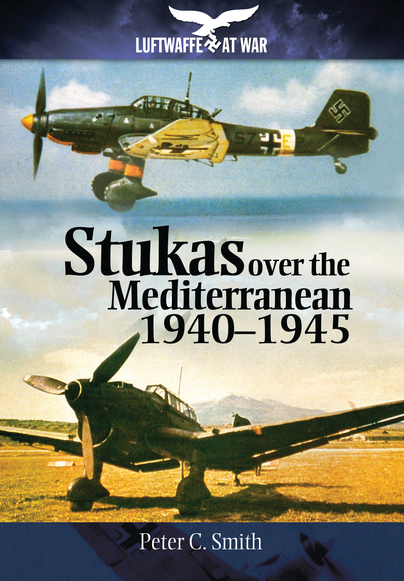 Order within the next 5 hours, 28 minutes to get your order processed the next working day!

This enthralling pictorial guide reveals the formidable power of one of the most feared warplanes of all time. The Ju 87 Stuka dominated the opening campaigns of World War II. It was a primary weapon of German Blitzkrieg tactics and the concept of lightning warfare. Together with the panzer, it transformed air and land warfare, with countries falling in days and weeks, rather than after campaigns lasting years. rnrnWith more than 100 photographs and detailed commentary, Stukas over the Mediterranean examines the role of German and Italian Ju 87s in such diverse campaigns as the attack on Yugoslavia, the battle for Crete and operations by the night flying squadrons.

The publisher has produced a number of series based on rare wartime images. The ‘Luftwaffe at War’ is one of these very popular series. The text is clear and concise, but the great strengths are in the aggressive pricing and the fine quality of the images, in this case including full colour images – Strongly Recommended.

In the Luftwaffe at War series, Peter Smith in his study of the JU 87 Stuka presents a fantastic review of the plane and its role in the Second World War.

Smith has an excellent flow and the use of initial wartime color photos leading into the bulk of black and white examples is almost a study in time so it seems. All examples used are crisp and clear, providing a work both for the general historical enthusiast or the seasoned veteran historian.

I heartily recommend this book, as well as the Luftwaffe at War series.

The Stuka fought in North Africa, and based in Sicily they were heavily involved in the raids on Malta and Royal Navy shipping in the Mediterranean. A set of photos of HMS Illustrious show how effective they could be. When making attacks they were often damaged by Flak, but still managed to get home even with significant airframe damage. The Stuka was also used a good deal in the Balkans and over the Greek islands, where in the later stages of the war they proved to be useful night intruders. As well as the Luftwaffe operated machines, there are plenty of images showing them in use by the Italian Air Force who operated the Stuka in some numbers.

Photo collections such as this are always popular with modellers in particular and this one is good value for money. One thing illustrated in a few photos, though I have seldom seen them in model dioramas, is the use of 'blast' pens at their home airfields, a scene which might give some inspiration for a diorama or two.