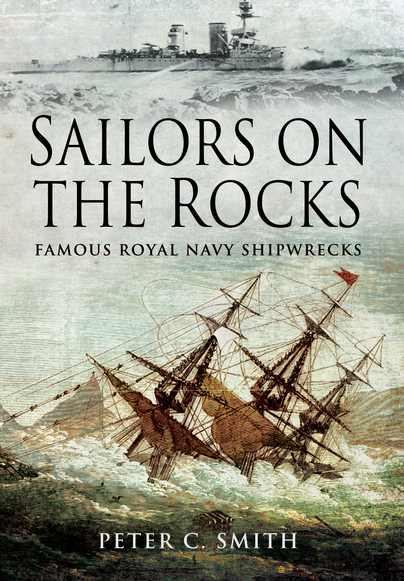 Sailors on the Rocks (Hardback)

You'll be £17.50 closer to your next £10.00 credit when you purchase Sailors on the Rocks. What's this?
+£4.50 UK Delivery or free UK delivery if order is over £35
(click here for international delivery rates)

For three hundred years or more the Royal Navy really did “Rule the Waves”, in the sense that during the numerous wars with our overseas enemies, British fleets and individual ships more often than not emerged victorious from combat. One French Admiral was to generously acknowledge that the Royal Navy possessed, “a tradition of victory.” And yet, in every other way, the waves were never ruled by any maritime power. Great fleets might wax and wane, ships grow ever more complex and powerful, but the sea, the eternally cruel sea, was always to have the final say.

This book highlights a sample array of disasters, occurring when men-of-war faced the ultimate test of the elements and lost. Among such tragedies are the wrecking of the Coronation in 1691, the destruction of the Winchester in 1695 and the great storm of 1703, along with a host of shipwrecks on far-flung shores from New Zealand to Nova Scotia, and from Florida to South Africa. Some of the featured stories are already famous, like that of the Birkenhead. Others are lesser-known, like the sister cruisers Raleigh and Effingham, separated by many years. More recently, steam power replaced the uncertainties of sail, but even so losses continued, from little destroyers in both world wars (Narborough, Opal and Sturdy among them) through great battleships like Montagu. Even modern warships equipped with every modern navigational device come to grief; witness the strange affair of the frigate Nottingham, or the humiliating grounding of the nuclear 'wonder' submarine Astute on Skye in 2010. rnrnThis unique book presents a fascinating insight into the malevolent power of the sea and storms over man's creation and dominion, chronicling some of the most dramatic shipwrecks ever to have occurred in our seas.

This aside, the main text is excellent, and the accounts of each of these wrecks are interesting and well researched. One comes away with a real idea of the many dangers faced by sailors over the centuries, and the valiant efforts of Royal Navy sailors to survive those perils.

...it presents dramatic stories whose
purpose is to tell good yarns about
notable naval shipwrecks.

'If you have an interest in the nautical world, grab a copy of Peter's book...'