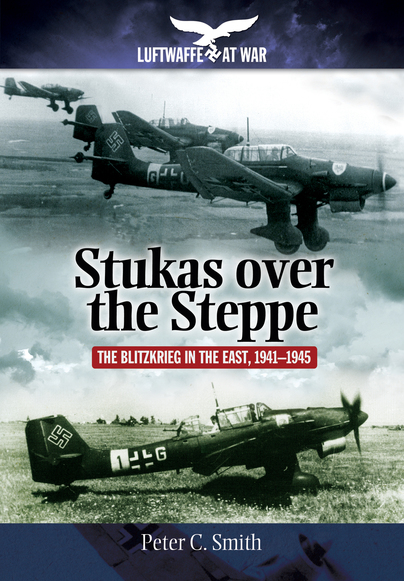 Stukas Over the Steppe (Paperback)

Add to Basket
You'll be £12.99 closer to your next £10.00 credit when you purchase Stukas Over the Steppe. What's this?
+£4 UK Delivery or free UK delivery if order is over £30
(click here for international delivery rates)

This enthralling pictorial guide reveals the formidable power of one of the most feared warplanes of all time. The Ju 87 Stuka dominated the opening campaigns of World War II. It was a primary weapon of German Blitzkrieg tactics and the concept of lightning warfare. Together with the panzer, it transformed air and land warfare, with countries falling in days and weeks, rather than after campaigns lasting years.

With more than 100 photographs and detailed commentary, Stukas over the Steppe captures the many roles adopted by these famous dive-bombers as they blasted a path across Eastern Europe.

The publisher has produced a number of series based on rare wartime images. The ‘Luftwaffe at War’ is one of these very popular series. The text is clear and concise, but the great strengths are in the aggressive pricing and the fine quality of the images, in this case including full colour images – Strongly Recommended.

The format of Smith’s text, I strongly believe, will engage both the seasoned academic and students of the Second World War, as well as the general historical enthusiast. There are two reasons I feel that the text offers such value. It is placed at a very competitive price and offers a thorough examination of the early conditions of the Luftwaffe and specifically the combined arms warfare which propel German arms to its early successes. Secondly the material is delivered in a smooth and straight forward style which makes it readability superb without being an epic.

...It is an excellent source and serves to highlight the value of the series and I would highly recommend it.

For modellers, a neat bit of detail which can help towards telling the story of a model you might choose to build. These photo collections provide a good source of reference for modellers and aircraft historians alike, and offer I think very good value for money.

Peter C. Smith is one of the world's leading authors on things maritime and is highly respected throughout the world. His previous books have been principally concerned with wartime naval vessels of which over twenty have been published. A complete list of his published work can be obtained from www.dive-bombers.co.uk