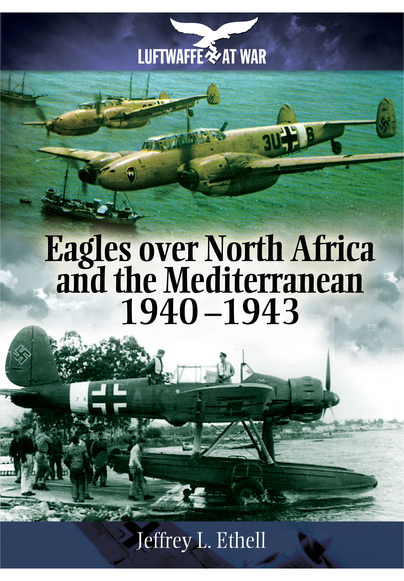 Click here for help on how to download our eBooks
Add to Basket
Add to Wishlist
Get Eagles Over North Africa (ePub) for FREE when you purchase 2 other eBooks.
Need a currency converter? Check XE.com for live rates

Although the Luftwaffe achieved a great deal of success in North Africa between 1940 and 1943, it was hampered by the constant demand for men and machines elsewhere, logistical problems, such as a crippling lack of fuel, and the harsh desert conditions.

An impressive selection of photographs from archives and private collections reveal the German and Italian aircraft used and developed in this theatre as well as the people involved. With insightful captions and supporting text, this offers a fascinating perspective on the Luftwaffe at war.

To be completely honest, I’d sort of forgotten that this review copy of Eagles was on it’s way to me. So it’s arrival was a rather pleasant surprise. In fact, it was an extremely pleasant surprise: This book, part of the Luftwaffe At War series (see below), is an absolute gem.

Click me to read the rest of this fantastic review!

This nice book just reprinted (April 2016) by PEN & SWORD publisher, tells the dramatic history of the hard battles in the North Africa and the Mediterranean that saw the confrontation of the Axis Regia Aeronautica and Luftwaffe against the Allied air forces.
The captions of the author are a good guide to the rich and interesting collection of images that portrait drama and tensions of the air war.in those harsh environments, perfectly reproduced and told.

This book is part of the Luftwaffe at War Series that covers the German air force and its equipment during WWII. Essentially, these are photo-essays, but they also include highly informative concise text and extended photo captions. The quality of the images is first rate and the selection of images matches, Some images are rare, or never before published in publicly accessible documents This book covers the story of the German air force and its equipment during the Mediterranean campaigns of 1940 to 1943. Highly recommended

Having seen quite a lot of illustrated WW2 aviation publications, I was pleasantly surprised by this book. In his introduction, the author not only gives a very clear and concise summary of the Mediterranean air war, but he also highlights the operational and logistical problems the Luftwaffe faced, in the desert and elsewhere. Those problems were in many cases caused by faulty strategic decisions “higher up”.

The images are excellent. Drawn from a very wide range of sources, they give a rare insight in the Luftwaffe’s daily life in the desert and the Balkans. I particularly like the early colour shots.

I recommend this book to everyone interested in the WW2 Mediterranean air war and to those, who want to get an impression of how it was on the German side.

Another new title from Pen and Sword in a series of Luftwaffe at War books first produced by Greenhill books, this particular one back in 1997. It follows the basic layout of this series with the first four pages being the background text to the particular topic for the title. That's followed by 8 pages of wartime colour photos, a couple of which will b well known to many, and the remainder are pages of black and white wartime images, all with informative captions.

As both an aircraft enthusiast and a modeller, this one I found to be immediately among my favourites of this series. The variety of aircraft types is very varied, and that in itself is interesting to see. There are Me 109s and Fw190s as well as Me 110 Ju 88 and Ju87. In addition to these however you will find picture of the huge 6 engined Me 323 Gigant, along with more for the Gotha glider and the smaller DFS 230. Others include the Ju 52 transport and the Hs 126. Plenty of interesting camouflage schemes, and with many of the photos showing the aircraft on the ground, plenty of details of associated ground equipment, detail where engine covers are removed for maintenance and uniform details for both aircrew and ground crew. More for the modeller comes in some of the scenes that are pictures, with things like the herd of sheep grazing around the parked aircraft, perhaps a great idea for a diorama that you might not have considered. Of the books in this series, this is certainly among my favourites for the variety that is included within it.

JEFFREY ETHELL (19471997) was an American aviation author and pilot who wrote extensively on aviation and military matters, authoring some 60 books and over 1,000 magazine articles. His publications include Target Berlin: Mission 250, 6 March 1944 and Jane's World War II Aircraft.