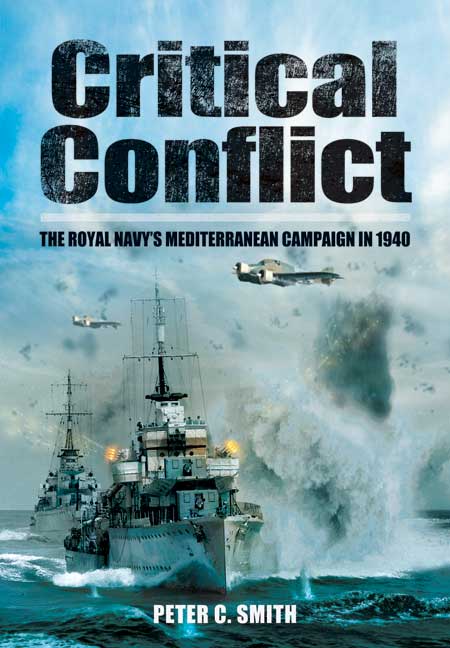 The Royal Navy's Mediterranean Campaign in 1940

Add to Basket
Add to Wishlist
You'll be £15.00 closer to your next £10.00 credit when you purchase Critical Conflict. What's this?
+£4.50 UK Delivery or free UK delivery if order is over £35
(click here for international delivery rates)

Critical Conflict is a fascinating and comprehensive account of the British fight to secure the most pivotal waterway of the Second World War - the Mediterranean.

During 1940 Churchill and the War Cabinet regarded safe passage for British ships in the Mediterranean Sea to be of paramount importance. Despite the catastrophic evacuation of the British Expeditionary Force from Dunkirk and the threat of imminent invasion from across the English Channel, it was considered that the vital trade routes to North Africa and the Middle East must be kept open. The German Kreigsmarine were at that time committed to North Sea and Atlantic naval forays. The French surrender left their fleet in disarray, some wishing to fight against their invaders and others supporting the Vichy government. The Royal Navy finally put matters to rest with the destruction of the French fleet in Toulon, an unsavoury but entirely necessary act of war. However, there remained the powerful and modern Italian fleet which, if allowed to run amok within the Mediterranean, could cause mayhem for the Allies. Their fleet had to be destroyed at all costs. This is the story of how this was achieved during 1940.

While this book is predominantly about the war in the Mediterranean and specifically with regard to the French Fleet after Frances capitulation the author has also thrown light on the interference made by officials in the war office and associated politicians some of whom had no experience of war at sea. Meticulously researched and including items from the papers of those who served this is a read that takes you to the scene of events.

Critical conflict is a fascinating and comprehensive account of the British fight to secure the Mediterranean, the most pivotal waterway of WWII.