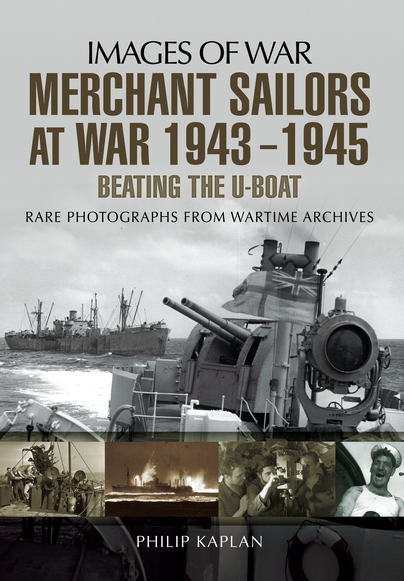 Click here for help on how to download our eBooks
Add to Basket
Add to Wishlist
You'll be £4.99 closer to your next £10.00 credit when you purchase Merchant Sailors at War 1943 - 1945. What's this?
Need a currency converter? Check XE.com for live rates

“The Battle of the Atlantic was the dominating factor all through the war. Never for one moment could we forget that everything happening elsewhere, on land, at sea, or in the air, depended ultimately on its outcome.” - Winston Churchill

Featured in this new volume from Philip Kaplan are images of some of the most iconic and important merchant ships of the latter years of the Second World War, along with intriguing shots of the men who sailed and worked on them. The indomitable HMS Sackville, the only surviving corvette of the Second World War, is afforded particularly prominent coverage, alongside a host of lesser-known but equally formidable ships.

The Corvettes (vessels that escorted convoys throughout the war) were amongst the wettest and most uncomfortable of all warships, and their crews were undoubtedly amongst the most heroic. This volume is, in effect, a photo essay on the corvette. Escorting the convoy system of defensive Allied boats in the Atlantic and tasked with preventing merchant ships from being sunk by German submarines and U-boats, the Corvette's job was invaluable.

This history, told in words and images, is sure to appeal to all military and maritime enthusiasts, representing an exciting addition to the established Images of War series.

This book provides an excellent introduction to the war at sea waged by the Allies against Germany and Italy. All of the books in this series are great starter books for anyone building a library on military actions in World War II.

The book is divided into eight sections:

- The sea and heavy weather

- The tramp steamers that formed the bulk of the convoys, particularly the slow ones - life on board and ashore

- How the war was illustrated, mostly via reproductions of posters, some American (and some items are from the First World War)

- The corvette, with a focus on the last surviving one, HMCS Sackville which is preserved as a museum ship in Halifax, and on the RCN’s immense contribution to the Atlantic battle

- Atlantic convoys, including a peaceful passage to and from by aircrew under training, contrasted with an engagement between a corvette and the Hipper

- Malta and the cost of its survival particularly in merchant ships, coming to a climax with Operation Pedestal. (There is an editorial glitch on p.97 where editorial slides into a quotation due to an accidental deletion)

- Normandy, mostly illustrated via shore-side subjects and closing with eight pages of photographs relating to U-boats and their concrete shelters on the Atlantic coast of France.

The illustrations (mostly photographs, excellently selected and informatively sourced) are supported by an eclectic mixture of reminiscences, documents and quotations linked by very informative editorial, for instance regarding lifesaving equipment. These sketch in the background to the section topics.

The selection of pictures is a wide spread of all the aspects of the importance of merchant shipping... The text makes for some interesting reading and, accompanied by suitable photos.