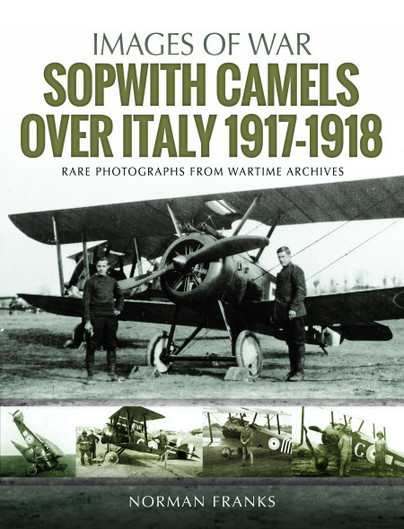 During the First World War, Italy was on the side of their British Allies and their fight was against the Austro-Hungarian Empire, bordering on Austria. In October 1917, the Austro-Hungarians managed to push the Italians back during the battle of Caporetto. With the danger signs obvious, both Britain and France sent reinforcements.

Britain’s Royal Flying Corps sent three squadrons of Sopwith Camel fighters, plus one RE8 reconnaissance squadron, and these Camel squadrons fought gallantly over the plains and mountainous regions of north-east Italy, sharing the air battle with aircraft of the Italian Air Force.

Despite the difference in landscape between France and Italy, the Camel pilots employed the same air-fighting tactics and assisted in ground support missions that proved just as destructive in Italy as they had in France. Accompanied by a large selection of photographs depicting the men and the machines that saw action, this book is a welcome addition to Pen and Sword’s Images of War series.

The book concentrates on the fighting centred on the Piave river and we see many of the airmen involved from both sides of the divide.

As the title suggests, the book includes many images of Sopwith Camels and plenty of other types appear.

Some well-known aces feature, including Godwin Brunowski, Billy Barker and Frank Linke-Crawford. As ever the great gain comes with the pictures and potted biographies of airmen who will be less well known to the general reader.

This isn’t Mr Franks’ first rodeo and the book shows all the signs of someone who knows what they are about. There a strong scent of devotion to subject combined with solid experience in the making of this pleasing collection.

Norman Franks' excellent book covering some 103 pages and over rare 100 images really brings to life an otherwise little known area of the Great War. For the images alone the book is worth buying, and any modeller or historian would learn much of use from these pages.

A valuable addition to anyone's bookshelf on the role of the RFC/RAF in the Great War. Recommended.

I learnt a lot in this one as well as enjoyed seeing the new archive photos, and about an aspect of WW1 I admit to knowing little or nothing about beforehand. Perhaps one of the most telling things I discovered are some statistics given in the Introductory chapter were the casualty figures for the region. Allied losses are given as 651,000 killed and nearly 1 million wounded against 404,000 killed and 1.2 million wounded on the Austro-Hungarian side. It provided me with some context for the fighting in the region and in this year of another anniversary, that of the RAF, a bit of RAF history which had escaped me before. Well worth a read this one, for the WW1 military historian as well as aviation history enthusiasts as well as aircraft and figure modellers.

Generally however, this is an interesting work on a little-known subject.