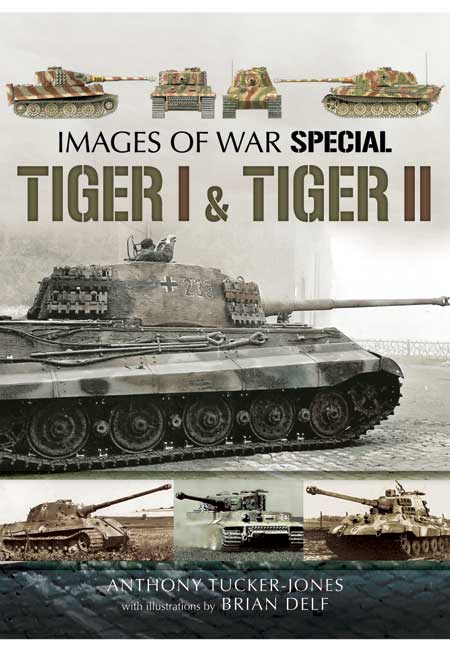 Tiger I and Tiger II (ePub)

Click here for help on how to download our eBooks
Add to Basket
Add to Wishlist
You'll be £4.99 closer to your next £10.00 credit when you purchase Tiger I and Tiger II. What's this?
Need a currency converter? Check XE.com for live rates

The German Tiger I and Tiger II (known to the Allies as the King Tiger or Royal Tiger) were the most famous and formidable heavy tanks of the Second World War. In their day their awesome reputation inspired such apprehension among Allied soldiers that the weaknesses of these brilliant but flawed designs tended to be overlooked. Anthony Tucker-Jones, in this illustrated history, tells the story of their conception and development and reconsiders their operational history, and he dispels the legends and misunderstandings that have grown up around them. The Tigers were over-engineered, required raw materials that were in short supply, were time-consuming to manufacture and difficult to recover from the battlefield. Only around 1,300 of the Tiger I and fewer than 500 of the Tiger II were produced, so they were never going to make anything more than a local impact on the outcome of the fighting on the Western and Eastern fronts. Yet the myth of the Tigers, with their 88mm guns, thick armour and brutal profiles, has grown over time to the extent that they are regarded as the deadliest tanks of the Second World War. Anthony Tucker-Joness expert account of these remarkable fighting vehicles is accompanied by a series of colour plates showing the main variants of the designs and the common ancillary equipment and unit markings. His book is an essential work of reference for enthusiasts.

If you are like me, this excellent volume will open your eyes to a new level of insight about these infamous tanks while offering a wealth of detail for your hobby.

Overall, this edition of Images of War provides a comprehensive history of two symbolic German tanks that put much fear into the hearts of Allied and Soviet soldiers. These two vehicles demonstrate how a small number of high-quality vehicles and expert crewmen can have a significant psychological impact. From early development to the end of the war, this book will give readers fascinating details that should make them hungry for more materials.

The author has done a very good job of encapsulating this history into a
remarkably small space and matching the fine illustrations...

The very fine Images of War series does what it claims on the cover
and delivers a great selection of very rare images. It also provides
excellent concise text. As a result, this new book will appeal to a
very wide readership and is highly recommended.

The narration is accompanied by photographs in black and white throughout the work, so a small collection includes 23 colour illustrations of different models and variants with various designs of camouflage adds. This is a useful and interesting narrative for modelers of tanks book.

I thoroughly enjoyed the book and readers looking for the basic history of the Tiger will find this an excellent starting point without all the technical details.

This is a concise, profusely illustrated discussion of the tanks use in battle, along with a lot of fascinating details, from paint schemes and anti-personnel protection to the development, qualities and failings of rare variants like the Elefant, Jagdtiger and Sturmtiger.

This is a concise, profusely illustrated discussion of the tanks’ use in battle, along with a lot of fascinating details, from paint schemes and anti-personnel protection to the development, qualities, and failings of rare variants like the Elefant, Jagdtiger, and Sturmtiger. The book is dominated, of course, by the images. The photos and color illustrations (by Brian Delf) will be of great value to modelers as well as armored vehicle enthusiasts. A chapter on fighting in the tanks, and one on fighting against the tanks, provide valuable insight from crewmembers describing the battlefield realities that exist beyond the cold statistics of gun caliber and armor thickness. It is one thing to know that the Ferdinand tank destroyer lacked a machine gun to use against enemy troops; it’s quite another to read of a crew desperately firing an MG-34 down the barrel of their 88mm gun in an effort to repel attacking infantry.

For the armor enthusiast, this book makes a fine introduction to the Tiger tanks or complement to other volumes. For the lay reader, Tiger I & Tiger II provides a succinct but potent blend of words and images that may be all that is needed to describe these legendary armored fighting vehicles and their battlefield history.

[Contains] a series of the colour illustrations, beloved by model makers, illustrating colour schemes for different areas of operation.

This Images of War Special gives us an entertaining look at the royal family of WW2 tanks with some excellent photos  – the usual mix of well and lesser known – in the format we’ve come to know. Anthony Tucker-Jones does his usual job of telling the story of the armour and it all cracks along in much the same way as his other books do. If you like this sort of stuff you’ll be quite happy.

The extra ingredient is a series of really nice colour plates by Brian Delf, showing Tigers, a Ferdinand and a Sturmtiger in a range of camouflage schemes. I think this adds a dimension to these books that really helps the package. As ever with AT-J we get snaps of the opposition to the Tigers in the form of the Allied tanks and guns that had the task of stopping them.