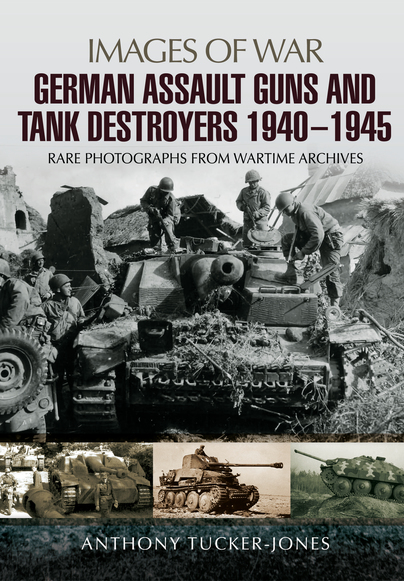 Click here for help on how to download our eBooks
Add to Basket
Add to Wishlist
You'll be £4.99 closer to your next £10.00 credit when you purchase German Assault Guns and Tank Destroyers 1940 - 1945. What's this?
Need a currency converter? Check XE.com for live rates

The assault guns and tank destroyers deployed by the Wehrmacht during the Second World War are not as famous as tanks like the Tiger and Panther, but they were remarkably successful, and they are the subject of Anthony Tucker-Jones's wide-ranging photographic history. As the conflict progressed, the German army had to find a use for its obsolete panzers, and this gave rise to the turretless Sturmgeschütz or assault guns designed for infantry support. From 1944 onwards they played a vital role in Nazi Germany's increasingly defensive war.

A selection of rare wartime photographs shows the variety of turretless armoured fighting vehicles that were produced and developed – various models of the Sturmgeschütz III, the Sturmhaubitze, Jagdpanzer, Panzerjäger, Marder, Hetzer. Often a lack of tanks meant that these armoured vehicles were called on to fill the panzer's role, and they proved ideal during the Germans’ defensive battles on the Eastern Front as well as in Italy and Normandy – they were instrumental in delaying Germany's defeat.

This highly illustrated account provides is a fascinating introduction to one of the less well-known aspects of armoured warfare during the Second World War.