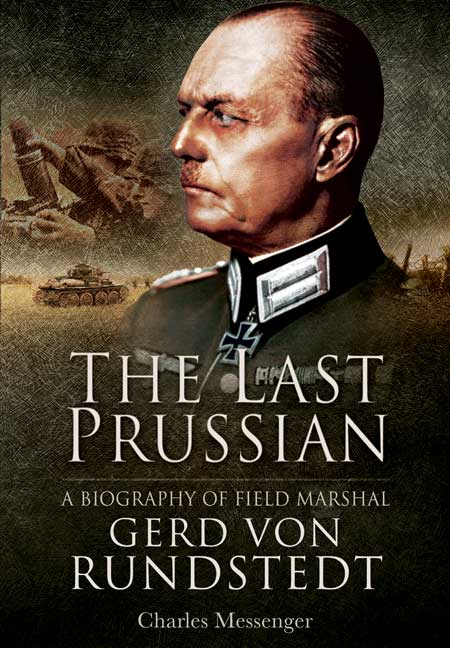 Click here for help on how to download our eBooks
Add to Basket
Add to Wishlist
You'll be £4.99 closer to your next £10.00 credit when you purchase The Last Prussian. What's this?
Need a currency converter? Check XE.com for live rates

Field Marshal Gerd von Rundstedt (1875-1953) was one of the foremost German commanders of the Second World War. After service on both the Western and Eastern Fronts during 1914-1918 he rose steadily through the ranks before retiring in 1938. Recalled to plan the attack on Poland, he played a leading part in this and the invasion of France in 1940. Thereafter he commanded Army Group South in the assault on Russia before being sacked at the end of 1941. Recalled again, he was made Commander-in-Chief West and as such faced the 1944 Allied invasion of France, but was removed that July. He resumed his post in September 1944 and had overall responsibility for the December 1944 Ardennes counter-offensive. Captured by the Americans, he was handed over to the British, who wanted to try him for war crimes. Only his ill health prevented this from coming about.

Charles Messenger is a magnificent storyteller and a master of drama. Throughout his lengthy account of von Rundstedt’s life, the author’s clear and elegant style, coupled with his keen attention to detail will keep the reader captivated till the very end.


The book describes in great detail the traditions and legacy of the Prussian officer corps and how this contributed to von Rundstedt’s character and judgment on different events.

The author recounts and scrutinizes the multiple events which had shaped von Rundstedt’s life in sufficient detail: from his early life to his participation in two world wars and finally his detainment as a POW in Britain and his trials as a war criminal.

Special attention has been devoted to von Rundstedt’s character, his relationship with the troops and his fellow officers and especially with Hitler. The author thoroughly analyzes the reasons as to why von Rundstedt kept his distance from the 1944 Bomb plotters, his participation in the Court of Honor, his famous Commando Order, and finally how much he knew about the atrocities committed behind the frontlines.

I highly recommend this book to anyone interested in the Field Marshal’s life and the WWII enthusiasts.

A welcome reprint of a balanced and most interesting account of the life of Field Marshal Gerd von Runstedt.

This book should be read and re-read as necessary: we have still much to learn from it.

I found this book to be very interesting. I was enlightened on the conduct and code of honor that the old Prussian General Staff represented as they were the last of the gentlemen warriors from an earlier time.

.. this is a much welcomed outstanding biography of one of Germany’s foremost commanders. Personifying the traditional Prussian image, the Allied regarded him as one of the most outstanding German generals. Thos who plotted against Hitler saw in him a possible successor and leader. After service in the Great War he rose steadily through the ranks. This is his story.
A first class biography. 10/10.

A Biography of Field Marshal Gerd von Runstedt by Charles Messenger
Old soldiers never die, they only fade away. In this timely re-issue, Charles Messenger recounts the life of a man who was first and foremost a soldier of the old school; an officer and a gentleman. Gerd von Runstedt appears in so many episodes of the collective dramas which make up World War II. But there was so much more to the man: His lineage, his career in the Great War, his stature as a staff officer and as a cavalry leader. He oozed tradition and was the embodiment of the Junker spirit. There is so much to admire.
For me, the account of Runstedt’s capture and imprisonment is so well documented it becomes compelling. That the post war British were muddled and quite ill at ease with their undignified plans to offload him and other field marshals for others to try as war criminals is something to take no pride in. Britain was as worn out as the generals it locked up and the new era was kind to none of them.
I’ve had the pleasure of attending some of the author’s lectures and can attest that he has a solid no nonsense approach to his business as a speaker and a writer. There is no gloss, just a well directed stream of facts and analysis. He is good value. This is an excellent book which will fill in a lot of the blanks you may have in your knowledge of the one field marshal whose name always crops up in major events.