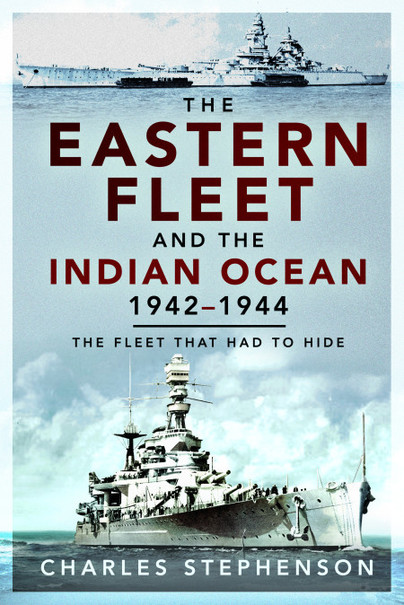 The Fleet that Had to Hide

The story of the British Eastern Fleet, which operated in the Indian Ocean against Japan, has rarely been told. Although it was the largest fleet deployed by the Royal Navy prior to 1945 and played a vital part in the theatre it was sent to protect, it has no place in the popular consciousness of the naval history of the Second World War. So Charles Stephenson’s deeply researched and absorbing narrative gives this forgotten fleet the recognition it deserves.

British pre-war naval planning for the Far East is part of the story, as is the disastrous loss of the battleship Prince of Wales and battlecruiser Repulse in 1941, but the body of the book focuses on the new fleet, commanded by Admiral Sir James Somerville, and its operations against the Japanese navy and aircraft as well as Japanese and German submarines. Later in the war, once the fleet had been reinforced with an American aircraft carrier, it was strong enough to take more aggressive actions against the Japanese, and these are described in vivid detail.

Charles Stephenson’s authoritative study should appeal to readers who have a special interest in the war with Japan, in naval history more generally and Royal Navy in particular.

"The Eastern Fleet is relatively unknown today since the operations in the Indian Ocean receive little coverage beyond the loss of the Prince of Wales and Repulse at the beginning of the war. This book addresses that imbalance with a thoroughly researched and detailed narrative. The author brings Eastern Fleet activities to the fore with good descriptions of its personalities, ships, and actions."

I enjoyed this book – it gives us an account of an often neglected part of the war at sea, and of the achievements of Admiral Somerville, who kept his fleet intact in the face of a potentially overwhelming opponent, then was willing to acknowledge that his fleet needed to improve massively before it could take on the Japanese.

The wartime activities of the British Eastern Fleet which operated against the Japanese in the Indian Ocean has received scant attention by authors being largely overshadowed by the Battle of the Atlantic, naval operations in the Mediterranean and, more recently, by accounts of the Arctic Convoys. Indeed, I have met those who believed that virtually all Naval operations in the Pacific were conducted by the American Navy. The sub title reflects the sad fact that whilst the Eastern Fleet was the largest fleet deployed by the Royal Navy but before 1945 it was especially vulnerable to attacks from Japanese aircraft and submarines until reinforced with an American aircraft carrier. Consequently, for reasons of survival during these years, it was necessary for the Fleet to evade the enemy rather than take more aggressive action. The author ranges from the grand strategic, such as the strategic priorities laid out by the CinC, Admiral Sir Brooke-Popham, for his command which relegated the Eastern Fleet to the bottom of the pile, to the sub-tactical, for example, in his excellent account of the raid by members of the Calcutta Light Horse and Calcutta Scottish on German “spy ships” in Mormugao Harbour on Goa. This meticulously researched, outstandingly clear, well written and absorbing account is long overdue and will most likely become a standard work. The text is most helpfully supported by over 80 pages of detailed end notes referenced to each Chapter and a detailed index. This is not only a book for naval historians but also for anyone with an interest in the War in the Indian Ocean region. Highly recommended.

A well written and absorbing account of the role played by this important but neglected force.

"The author succeeds in this well-researched and documented book to bring to light the British Eastern Fleet, which operated in the Indian Ocean until the strong British Pacific Fleet took the war to the Japanese home islands."

Charles Stephenson’s well-researched and absorbing narrative gives this forgotten fleet the recognition it deserves over fifteen chapters many of which include valuable eye-witness reports.

Stephenson’s 80 pages of notes and source references give plenty of material for those who want to ‘learn more’; however the general reader, and indeed the specialist, can be satisfied with this expertly written and absorbing study of the Eastern Fleet and the Indian Ocean 1942-1944.

As featured via reader competition