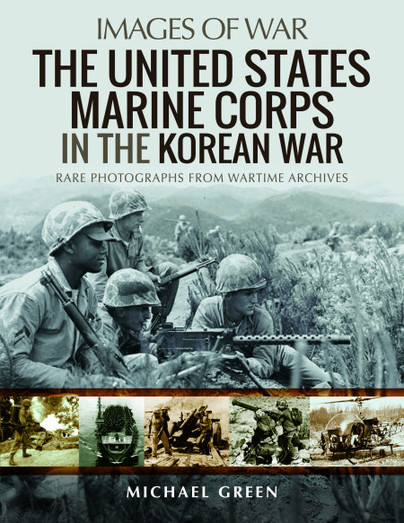 Add to Basket
Add to Wishlist
You'll be £15.99 closer to your next £10.00 credit when you purchase United States Marine Corps in the Korean War. What's this?
+£4.50 UK Delivery or free UK delivery if order is over £35
(click here for international delivery rates)

Order within the next 4 hours, 4 minutes to get your order processed the next working day!

In November 1950, the Chinese Army invaded North Korea with eight divisions tasked with the destruction of the 1st Marine Division at the Chosin Reservoir. The Marines made a 78-mile fighting withdrawal in arctic conditions before being evacuated by the US Navy.

In February 1951, the 1st Marine Division returned to combat assisting Eighth (US) Army to repulse five Chinese Army offensives over four months. By November 1951, the large-scale back and forth offensives operations by the opposing sides had ended, replaced by a stalemate which lasted until the 27 July, 1953 armistice. The bitter three-year conflict accounted for the death of 4,267 Marines with another 23,744 wounded.

With the Korean War occurring so soon after the end of WWII, this title from Pen and Sword shows you how quickly the military progressed in a short time. Things such as jet aircraft are alongside aircraft from WWII such as the Corsair. Helicopters are making their presence felt, enabling the quick evacuation of injured men. Alongside the fire power of the United States, you also get to see some of the weaponry of the North Korea, most of which came from the Former Soviet Union until the intervention of the Chinese. A truly great title for anyone interested in the Korean War and the early advances in rotary wing assets in combat.

A book that I recommend to anyone who wants to know more about this war and the ferocity of its fighting.

"The mix of display and in-the-field shots offers a good all-around look at the Marines and their air, ground, and sea weaponry, plus the occasional North Korean or Chinese POW. Another winner in the series."

"This book provides a ready reference for figure, AFV, or diorama modelers as well as good reading for anyone looking for a concise understanding of the complicated back and forth nature of the 'Forgotten War'."

We warmly recommend this book to all our readers and especially those unfamiliar with this ‘sideshow’ of a war. Having read this you will want to go on and read more about this conflict.

This a good summary of the Korean War which will interest warship enthusiasts because it provides a basis for further study.

I recommend this book if you have any interest in USMC history or the Korean War and additionally, this is a good primer with many unseen photographs in it that really bring the story to life and give a good foundation to anyone looking to learn more about the USMC in the Korean War.

This book will appeal to anyone interested in the history of the Korean war and especially to USMC historians. Its format is very appealing, and the period photos are great – they show how things were at the time rather than modern imagery. In short, it is an interesting volume, and the author has done a great service to the USMC by producing this wonderful tome.

"This book will be of interest to modelers and military historians alike. ​Highly recommended."

A very welcome introduction to this aspect of the conflict and an important episode in the history of the USMC, it’s highly recommended.

This gives a fine outline of events, and the actions of the US Marines in particular. It is the collection of archive images however that will rightly be the main attraction for this one. Maybe my age, but with memories of the great TV series M.A.S.H., this one struck a particular chord.

With the American-supported South Vietnamese government verging on collapse in early 1965, American President Lyndon Johnson decided to commit American conventional ground forces in the form of a United States Marine Corps (USMC) brigade of approximately 3,000 men on March 8, 1965. So began a massive and costly 10-year commitment. At its height in 1968, the USMC had 86,000 men in South Vietnam. Almost 500,000 Marines would eventually rotate in out of South Vietnam during their typical one-year tours of duty. In the end, the fighting during such well-known battles at Con Tien, Chu Lai, Hue, Khe…

Click here to buy both titles for £31.98
More titles by Michael Green