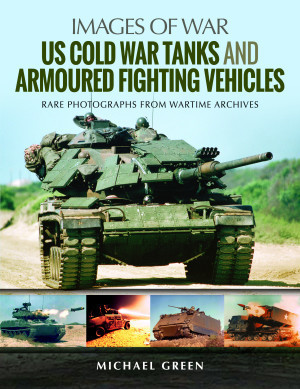 Add to Basket
Add to Wishlist
You'll be £11.89 closer to your next £10.00 credit when you purchase US Cold War Tanks and Armoured Fighting Vehicles. What's this?
+£4.50 UK Delivery or free UK delivery if order is over £35
(click here for international delivery rates)

To counter the Soviet threat and that of their client States during the Cold War years 1949-1991, the American military deployed an impressive range of main battle tanks (MBTs) and armoured fighting vehicles (AFVs).

The Patton series of medium MBTs (including the M46, M47 and M48) supplemented by the M103s Heavy Tank initially formed the core of the US tank fleet. In 1960 the M60 MBT with its British designed 105mm gun entered service and, in turn, was replaced by the M1 Abrams in 1980.

The armoured personnel carrier (APC) range included the ubiquitous M113 and its replacement the M2 Bradley, cousin of the M3.

Expert author Michael Green covers all these vehicles and their variants in this informative and superbly illustrated Images of War series work.


For niche readers, this book will delight anyone with an interest in Cold War technology or general tank designs. Green provides a thorough, highly detailed look at his subject over decades of development and evolution.

As with all the Images of War series, this one is well written, beautifully presented and there are lots of great images which makes it a must have reference book for scale modellers of Cold War machinery.

The information that Michael Green gives us is short and sweet on each Tank and AFV but it’s enough, I thought. If I was concentrating on a specific model, I would definitely use this book along with other, more detailed, reference books.

The 220-page book is a joy for the eyes because it examines, in an almost exhaustive way, every vehicle used by the USA for a period of about 50 years. There are not only exterior photographs but also diagrams of the internal arrangement of the vehicles and photographs of the passenger and crew compartments. To contextualise the laborious evolution of vehicles, there is no shortage of photos of what was produced in the USSR at the time. All this makes this book a must for any military vehicle enthusiast and for any historian.

The Images of War series has proved very popular, setting the high standard maintained by this new addition to the series. The Cold War set the US Army a number of challenges, one of which was a virtually continuous high level of alert with a series of conventional conflicts and surrogate wars, but always under the shadow of the prospect of a nuclear battlefield. – Very Highly Recommended.

The iconic "Images of War" series continues with a look at tank and armoured fighting vehicle developments after the end of WWII.

A really good source of reference, ideal for scale modellers.

This is a great volume looking at US armour during the Cold War. The author does a great job of including both the pro’s and con’s of the vehicles he’s discussing, which make for interesting reading.

Obviously, the photographs are the main attraction with these books, but Green’s commentary certainly enhances the reading experience.

The author has provided nice bite sized chunks of information on a huge swath of armour and presents it in an interesting manner.

Michael Green is a very knowledgeable author on the subject of armoured vehicles and this is another very good addition to his contributions for the Images of War series.

Gives a brief summary of each vehicle and would provide a resource for anyone wanting to build models from this era.