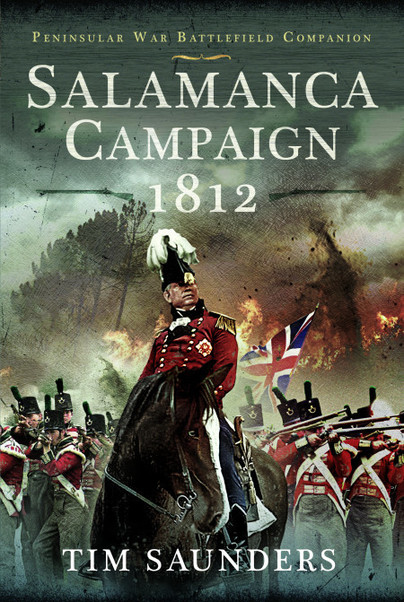 Add to Basket
Add to Wishlist
You'll be £20.00 closer to your next £10.00 credit when you purchase Salamanca Campaign 1812. What's this?
+£4.50 UK Delivery or free UK delivery if order is over £35
(click here for international delivery rates)

After a gap of two years, the 1812 Salamanca Campaign saw Wellington taking the offensive in Spain against Marshal Marmont’s Army of Portugal. Marching from the border fortress of Ciudad Rodrigo, which fell to the Allies in January, neither commander was willing to take the risk of a general action without a clear tactical advantage. The result were stand-offs as Wellington offered battle on the San Christóbal Heights, but once the small French-garrisoned forts left behind in Salamanca fell, Marmont withdrew to the Douro. For over a week the two armies shared the cooling waters of the river before Marmont ‘humbugged’ Wellington and fell on the Allied left flank at Castrejón. Wellington rushed to the aid of the Light and 4th divisions with the heavy cavalry. Over the following days Marmont dexterously manoeuvred Wellington back towards Salamanca, with both armies within cannon shot still not risking battle.

When it seemed Wellington would have to march back to the safety of Portugal, Marmont finally made a mistake on the plains south of Salamanca on 22 July 1812, by allowing his army to become over extended. Wellington saw what was happening and after weeks of marching and counter marching, the battle the soldiers earnestly hoped for was on.

In the past it has been difficult to place the fighting on the ground in the centre of the Salamanca battlefield, where ‘vast clouds of smoke and dust that rolled along the basin’ obscured vision even for those fighting. Supplementing their letters, diaries and memoires with modern geographical aids, archaeology and a stout pair of boots, it is now possible to reconcile the sequence of the battle with locations, in a way in which it was not feasible even a few years ago.

Like many history books, this one teaches us much more than just the detail of the battle. I particularly like the tag line on the rear of the dust jacket, “Background reading for studies in defence, manoeuvres and logistics”, especially with references early on in the book from Wellington about his struggles to keep his forces supplied. There are definitely lessons to be learned.

This is another slice of history that I was blissfully unaware about, but now at least have a ‘working’ knowledge; so, I am going to award it 4 anchors. There is really nothing to dislike about this book, it’s an easy read, properly thought through and gives you the basics as the author currently understands them.

Tim’ books are filling a large space on my bookshelves at the moment with some excellent books on the Peninsular War. Along with his 2 books on the Light Division this new volume carries on from the previous Sieges of Ciudad Rodrigo 1810 & 1812 and Massena at Bay 1811.

This book again uses Tim’s experiences of visiting the battlefields and reenactors for some of the illustrations. The book is a great guide to the terrain and events of the battle and draws on loads of sources and new archaeology to build a must have to anyone studying what is known as “Wellingtons Masterpiece.

It is probably 15 years since I was last at Salamanca (I think that the author was there in the same group of enthusiasts) and this account of the campaign and battle really pulls together the narrative of the events. Being on the battlefield has no equal in seeing the ground and therefore understanding the context for decisions, but this book does an excellent job in conveying the situation. It is well supported by original sketch maps and images. Well worth a trip to Salamanca (a beautiful city) and walking around the Arapiles with this book.