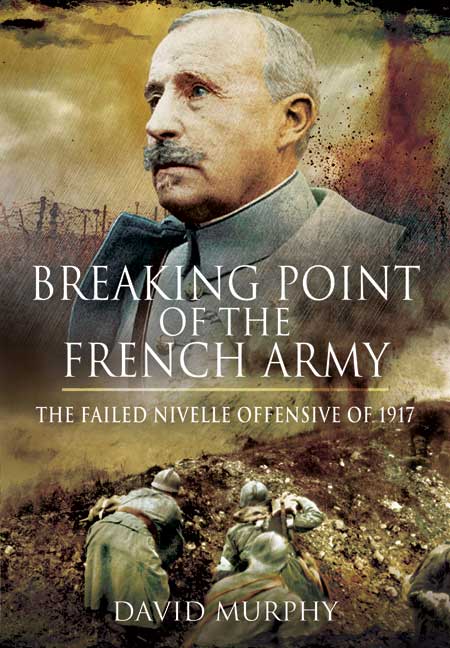 The Nivelle Offensive of 1917

Add to Basket
Add to Wishlist
You'll be £19.99 closer to your next £10.00 credit when you purchase Breaking Point of the French Army. What's this?
+£4.50 UK Delivery or free UK delivery if order is over £40
(click here for international delivery rates)

In December 1916 General Robert Nivelle was appointed Commander-in-Chief of the French armies fighting the Germans on the Western Front. He had enjoyed a meteoric rise to high command and public acclaim since the beginning of the war - he was a national hero. In return, he proclaimed he 'had the formula' that would ensure victory and end the conflict in 1917. But his offensive was a bloody and humiliating failure for France, one that could have opened the way for French defeat.
This is the subject of David Murphy's penetrating, in-depth study of one of the key events in the history of the Great War. He describes how Nivelle, a highly intelligent and articulate officer, used his charm to win the support of French and British politicians, but also how he was vain and boastful and displayed no sense of operational security. By the opening of the campaign, his plan was an open secret and he had lost the ability to critically assess the operation as it developed. The result was disaster.

As featured on Arrse.

The reasons for the failure of the Nivelle Offensive, and its implications, are examined in this book.

A poignant account, meticulously researched and strongly told. The result is as disturbing as it is compelling. Warmly recommended.

Overall the author has done a good job on a subject rarely covered in English.

Excellent account of an often overlooked episode of WW1. There has been little enough written on this offensive in English and this fills a major gap. Planned as the major Allied effort of 1917 it ended in failure and mutiny. Nivelle must have been one of the most callous generals of the war. A compelling treatment of a disastrous military blunder.

I found myself wondering again, why are we so vulnerable to people like Nivelle? Was it his own self-belief, his own polished plausilbility? Perhaps this book could serve as an awful, but necessary, reminder of the dangers of people like Nivelle. The dangers of hubris, wishful thinking, and the awful human tendency of so many to believe what they want to believe. To believe someone who seems to offer easy answers to hard and complex questions.

As I read this book it was revealed that so many people had doubts about Nivelle's plan. But, for various reasons nothing was done. The offensive began, unfolded, and led to catastrophe. I fear that there is all too much truth is one summary of Nivelle's offensive: Nivelle said he would win the war, and he very nearly did, for Germany.

DAVID MURPHY lectures in military history and strategic studies at Maynooth University, Ireland. He was a major contributor to the Royal Irish Academy’s Dictionary of Irish Biography, and has taught at University College, Dublin and Trinity College, Dublin. He became the first Irish scholar to be awarded a fellowship to the West Point Summer Seminar in Military History. He has lectured at West Point, at the US Army Command and Staff College. His publications include Lawrence of Arabia, The Arab Revol, The Irish Brigades, 1685-2006: A Gazetteer of Irish Military Service Past and Present, Irish Regiments in the World Wars, Condottiere, 1300-1500: Infamous Medieval Mercenaries, The Arctic Fox: The Life of Admiral Sir Francis Leopold McClintock, and Ireland and the Crimean War.