As featured in, The Argus (Brighton)

You'll be £8.99 closer to your next £10.00 credit when you purchase Brighton in the Great War. What's this?
+£4.50 UK Delivery or free UK delivery if order is over £35
(click here for international delivery rates)

Although the impact of the Great War on Brighton was profound, the seaside town was spared any direct attack by the enemy. The fear of spies and sabotage, however, was widespread at first and aliens were an issue which had to be swiftly resolved under new legislation. Allies, of course, were warmly welcomed, and accommodation was soon provided for those fleeing the catastrophic events in Belgium.

Between 1914 and 1918, Brighton made major contributions to the war effort in many ways: by responding readily to the call to arms, by caring for great numbers of wounded (the story of the exotic Royal Pavilion being used as a hospital for Indian casualties is widely known locally) and by simply being itself – an open and welcoming resort that offered sanctuary, respite and entertainment to besieged Londoners and to other visitors, from every stratum of society.

The book looks at the fascinating wartime roles of Brighton’s women, who quietly played a vital part in transport services, industrial output and food production. Non-combatant menfolk also kept the wheels turning under very trying circumstances. When the meat shortage became acute, the mayor himself took direct action, requisitioning ninety sheep at Brighton Station for the town which were destined for butchers’ shops in London.

The names of no fewer than 2,597 men and three women who made the supreme sacrifice were inscribed on the town’s memorial, which was unveiled at the Old Steine on 7 October 1922 by Earl Beatty. At the ceremony, the earl declared that ‘it was by duty and self-sacrifice that the war was won.’ It remained, he said, for those who had survived the conflict to ensure that the great sacrifices of the past, both by the dead and by the living, should not have been made in vain. We remember them in this book.

All in all this is a fine book which delivers on what it promises, a history of Brighton during the First World War. The author has rightly in my view eschewed any attempt to draw out any grand themes or wider conclusions – focusing on providing a carefully researched piece of local history. It provides an interesting read for anyone who enjoys learning about life on the home front – and will of course hold particular value for anyone who lives in or has a connection to the town itself. There is also a very good section at the end providing information on sources and further reading.

Recommended for readers who want something colourful and lively – no heavy going – and enjoy a good time. Much like Brighton itself!

'This is a lovingly researched and absorbing read, and the copious illustrations evocatively capture a long-gone era.'

A fascinating book, packed with detail and very nicely illustrated.

Who Do You Think You Are? Magazine July 2016 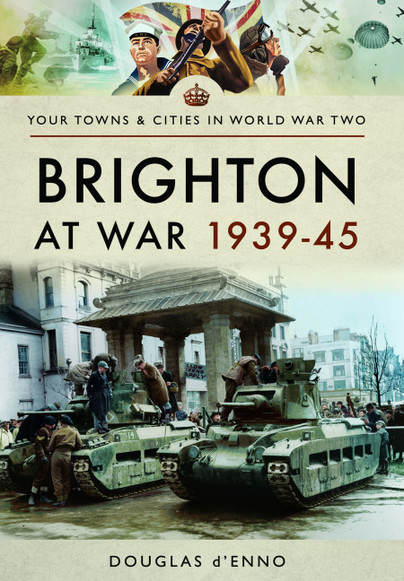 Long before war was declared on 3 September 1939, Brighton had steadily and carefully prepared for the coming conflict by building shelters, organising defence and rescue services, and providing the population with advice of its own or from government sources. These precautions stood the town in good stead when the first bombs fell on it in mid-1940 and during the many subsequent attacks. The resort did not, admittedly, suffer as grievously as some other coastal locations, yet civilian casualties totalled nearly 1,000, with over 200 deaths recorded in the civic Book of Remembrance. Serious injuries…

Click here to buy both titles for £22.49
More titles by Douglas d'Enno