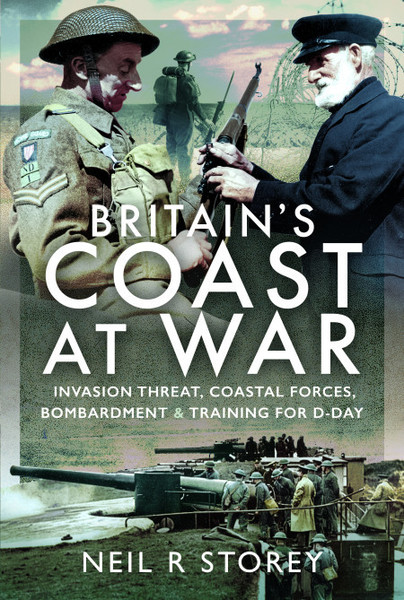 Add to Basket
Add to Wishlist
You'll be £20.00 closer to your next £10.00 credit when you purchase Britain's Coast at War. What's this?
+£4.50 UK Delivery or free UK delivery if order is over £35
(click here for international delivery rates)

The whole of Britain’s coastline was involved in the struggle against the Nazis. In the early days invasion was the main threat.Dover and the South East suffered grievously from aerial attacks and were also shelled by German artillery from across the Channel, the area was dubbed ‘Hell Fire Corner.’ Cities and towns all around the coast such as Plymouth, Portsmouth, Hull and Great Yarmouth were the targets of devastating air raids. The coast and lochs of Scotland became a key training area for commandos and assault troops for D-Day and its ports saw the return of crews of sunk vessels of both sides.

The East Coast was pivotal to North Sea operations against enemy mining and E-boat operations. The Western ports, particularly Liverpool, were crucial to the vital Atlantic convoys and the defeat of the U-boat threat.

The final months of training and preparation for D-Day centred on the South Coast when disaster struck during Exercise Tiger off Slapton Sands.

Britain’s coastal ports continued to attract ‘Tip and Run’ raids and the attention of V rockets that changed the character of many these towns and cities forever. Neil Storey’s superbly researched work brilliantly describes all this and more in words and images.

5 stars: Coasts are what we do
Read the full review here

"For those who wish to learn more about this aspect of the Home Front I cannot recommend better read!"

This book is like one of those ‘behind the scenes’ type books or films, in that we all know the major part of war is the battles and fighting but this is the ‘backstage’ crew in that this book is all about the homeland coastal defences, the local defence volunteer forces. The women getting in the fish and helping support the fishing industry to provide food for men and a nation and it’s about training the men to be able to do what we need the soldiers to do. I loved this book because it was about the background work and there was a whole lot of local history giving you the stories and tales of those trying to live life on the homefront and doing the work back home that a nation needed doing. Now I’m going to say the book is very well written indeed and a great job has been done. But I’m going to say the photographs in this book are equally important to the story, there are over 200 altogether and really sum up a country’s war spirit. I’m even going to say this book is so good, this book is definitely in my top 5 books of this year for sure, I want to re-read it and use it as a reference guide. If you want to read a great book this year that is more than just about war, this is it.

I enjoyed the 8.5+ hours I spent reading this 272-page WWII history. The book includes several first-hand accounts. It is a very readable history though it contains many details. The book is an interesting and different look at Britain at war. I like the selected cover art. I rate this book as a 4 out of 5.

An interesting look at the coastal war in Britain during WW2. Good first hand accounts and stories makes this a good historical read.

History buffs will know that there is so much more to understanding the events of WWII than what we see in popular films and documentaries. The impact was so far reaching, both in terms of geography and human experience and it is hard to imagine an impact area which has not been explored. England was devastated by the war and the impact was felt beyond the battlefields of Europe. This book shines a spotlight on the impact on the coastal regions of England and the people who lived, and died there. The author does a good job in presenting this perspective in such a way as to make it both an interesting one off read for any reader as well as a detailed exploration for the WWII history buff. Great job.