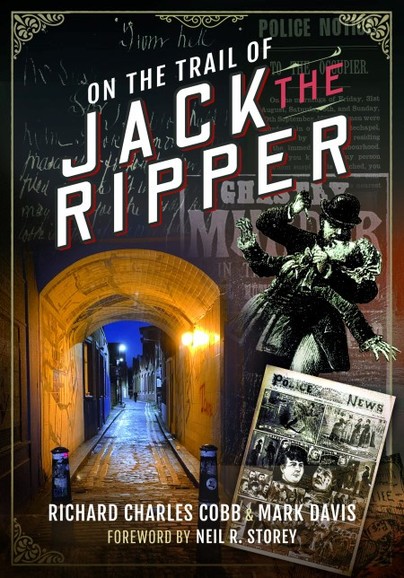 On the Trail of Jack the Ripper (Paperback)

Preorder
Add to Wishlist
You'll be £11.99 closer to your next £10.00 credit when you purchase On the Trail of Jack the Ripper. What's this?
+£4.50 UK Delivery or free UK delivery if order is over £40
(click here for international delivery rates)

For 132 years, the ghastly and horrific murders committed in London’s East End by the infamous ‘Jack the Ripper’ have gripped and baffled the world. The Ripper commenced his series of atrocities at the end of August and continued freely until the beginning of November 1888 when inexplicably the murders stopped…In all, five women were brutally murdered and savagely mutilated in the most unimaginable way. The killing spree centred in and around the impoverished rabbit warren of alleys and rookeries of Whitechapel. The invisible killer was never caught despite the very best intentions of the police and thousands of would-be detectives following the grim proceedings.

Since those dark days of murder committed by gaslight, the mystery of Jack the Ripper has become the ultimate cold case amongst crime historians and arm chair researchers worldwide, with a multitude of books, plays and dramas all hoping to solve what London’s finest Victorian detectives failed to do.

Given the time that has elapsed since the murders, much has changed and the crime scene locations which the Ripper and his victims knew would be quite unrecognisable to them now. Equally, to the modern-day Londoner or visitor, the locations would remain largely unknown…until now.

True crime and social historian Richard C Cobb returns to the Whitechapel of 1888 to see what remains from this dark time in London’s history and to take the reader on a step-by-step tour of the modern world of Jack the Ripper, giving a detailed history of the victims, the crimes and the police investigation. We also look at other victims (outside the accepted five) which may have been killed by the same man.

Using the original police reports, state of the art photographs, unseen images and diagrams, he presents the truth about what actually happened in the autumn of 1888 and what remains of Jack the Ripper’s London today. He also focuses on the ever-changing face of London’s End End, giving the reader a real sense of how the past meets the present in arguably London’s most vibrant and cultural quarter…where the shadow of the Ripper is never too far away.

Richard C Cobb is regarded as one of the world's leading authorities on Jack the Ripper and the Whitechapel murders. He is a true crime author and founder of The Dagger Club which gathers together experts and historians in the field of true crime for research projects, social occasions, conferences and events. Richard also runs award-winning tours in and around London, focusing on Jack the Ripper, the Kray twins and the cultural history of Spitalfields and Brick Lane. Originally from Ireland, he now lives in London.

Neil R. Storey is an award winning historian and author of nearly fifty books. A graduate of University of East Anglia, he is an internationally recognised authority and lecturer on British crime history. Known for his ground-breaking research, his remarkable library and archive of original photographs, documents and manuscripts, Neil frequently appears as guest expert on television and radio factual programmes such as Who Do Think You Are? and The Buildings That Fought Hitler .

Who was Inspector Frederick Abberline, the lead detective in the Jack the Ripper case? Why did he and his fellow policemen fail to catch the most notorious serial killer of Victorian England? What was he like as a man, as a professional policeman, one of the best detectives of his generation? And how did he investigate the sequence of squalid, bloody murders that repelled – and fascinated – contemporaries and has been the subject of keen controversy ever since? Here at last in M.J. Trow's compelling biography of this pre-eminent Victorian policeman are the answers to these intriguing questions.…