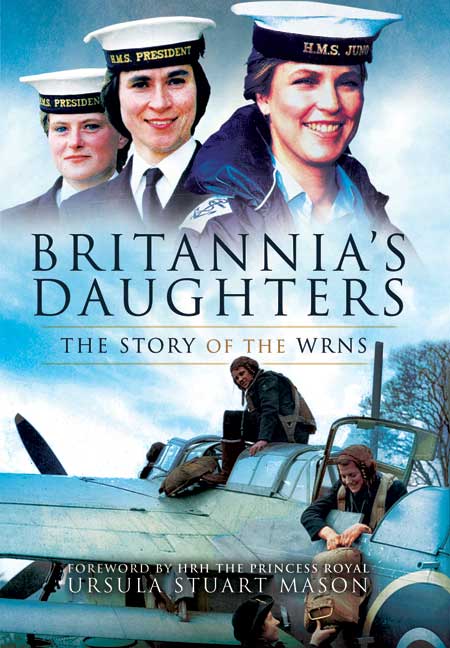 Add to Basket
Add to Wishlist
You'll be £12.99 closer to your next £10.00 credit when you purchase Britannia's Daughters. What's this?
+£4.50 UK Delivery or free UK delivery if order is over £35
(click here for international delivery rates)

The Women’s Royal Naval Service was formed in 1917 when the call was for volunteers to release a man for sea service. At the peak there was over 5,000 women serving in Britain and overseas, but efforts to maintain the service in peace time were unsuccessful, and it was to be 1939, when the Second World War threatened, before the Wrens were reformed. Theirs was a different and altogether more demanding role which involved the carrying out of some highly secret and responsible duties, and many more of them served outside Britain. By 1945 there were over 75,000 officers and ratings and when the War ended, and those who wished were demobilized, a permanent Service was set up, providing a career for women alongside men of the Royal Navy.rnrnThis is their story, often told in their own words, which mirrors the changing place of women in our society in a century of tremendous social progress.

Author Ursula Stuart Mason holds the perfect qualifications for this, a fairly definitive guide, to the Women's Royal Naval Service whose members were always `affectionately' known as Wrens. In addition to serving on Mountbatten's staff during WW2, as head of public relations at the National Maritime Museum, Greenwich she was the driving force behind the WRNS Diamond Jubilee Exhibition held there in 1977. She is also the author of `The Wrens 1917-1977,' other books and much more besides.

From just reading the back cover of this work, I learned so much about this extraordinary women's service and, with appetite suitable whetted, I was soon turning page after page - eager to learn more. Formed in 1917 towards the latter part of WW1 so that men could be released from shore duties and go to sea, their 5,000 members were disbanded after WW1. Reformed in 1939 at the beginning of WW2, they had 75,000 members by the end of that particular conflict. Their motto `Never at Sea' stood the test of time until significant changes to their conditions of service were introduced in 1990 when women were finally allowed full and equal status with men and the right to go to sea.

The book itself is set out as one would hope to find - by starting at the beginning in 1917 and concluding with the changes in the early nineties and the effects those changes brought to the world's most senior navy. There are 14 chapters each dealing with a significant period - including that time between the two world wars when the WRNS did not exist.

As the reader progresses through the work, the author skilfully continues to bring our knowledge of the WRNS up to date whilst continually adding anecdotes and personal experiences from those who were there at the time. Chapter 9, for example quickly draws on the experiences of several ladies who recall their own trades, daily routine and, one in particular who watched as an officer, caught in open ground, is killed as he defiantly fired his revolver at a diving Stuka.

It really is enthralling stuff and a `must' read for all former Wrens and anyone else with an interest in the subject.